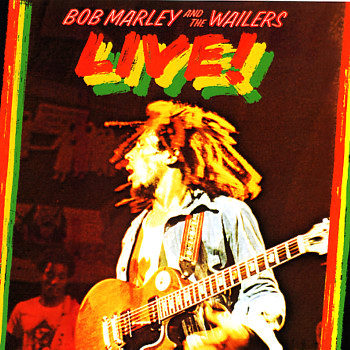 A great global showcase for the growing power of Bob Marley – an excellent live set recorded in London in 1975, and a date that shows Bob and The Wailers working with the crowd in this really universal spirit! The group's almost got a funkier current here than on some of their studio record – and their sharp edges are warmed up by female backing vocals which seem almost to act as a bridge between Marley's lead, and the very enthusiastic spirit of the crowd! The whole thing's great – and titles include totally burning versions of "Trenchtown Rock", "Burnin & Lootin", "Them Belly Full", "Lively Up Yourself", "No Woman, No Cry", "I Shot The Sheriff", and "Get Up Stand Up".  © 1996-2023, Dusty Groove, Inc.
(80s black label pressing in a cover with a barcode. Cover has a cutout notch.)