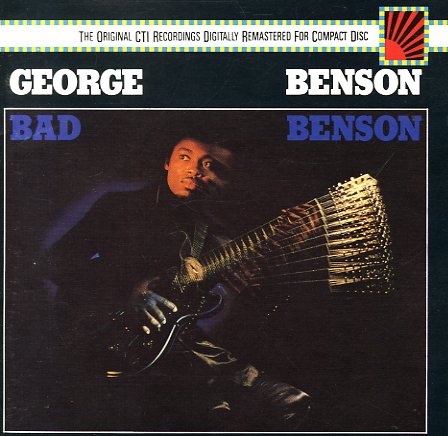 Pretty mellow stuff from George Benson, but with some nice moments! Don Sebesky handled the arrangements for this set of larger backings – but Benson's guitar is right out front, hitting some super-dope lines at the best moments, stretching out from the warm Fender Rhodes or horn heavy backings. Highlights include "No Sooner Said Than Done", which has some very weird processing on the guitar; "Full Compass", which has some nice hard drums; and "Summer Wishes, Winter Dreams", a mellow moody track. CD also features 3 bonus tracks – the previously unreleased "From Now On", and new mixes of "Serbian Blue" and "Take The A Train".  © 1996-2021, Dusty Groove, Inc.

Good King Bad
CTI/Mosaic, 1975. Used
CD...$9.99 (LP...$9.99)
Sweet 70s funk from George Benson – an album that's a bit smoother than some of his earlier work, but still free from the commercial polish of his later hits! Maestro David Matthews is at the helm for this session – and most numbers have a full backing from players who include some of ... CD

It's Uptown (plus bonus tracks)
Columbia, 1966/1967. Used
CD...$6.99
George Benson's first LP for Columbia – a hard, heavy, soul jazz slammer that bears no resemblance to his overproduced work of the 70s! The album's a real cooker – recorded hot on the heels of Benson's classic work on Prestige with the Jack McDuff group, and sounding a lot like McDuff's ... CD

White Rabbit
CTI, 1971. Used
CD...$9.99
One of the moodiest sessions on CTI from the early days – and a landmark album that took George Benson from the funky jazz scene into the upper reaches of 70s jazz. The record was put together by Don Sebesky, and it's a lot more high concept than some of George's earlier work – and ... CD

Keys To The City
CBS, 1987. Used
CD...$11.99
With Larry Dunn on keyboards and arrangements, Don Myrick on saxophone, Steven Dunn on drums and percussion, Roland Bautista on guitar, Bill Ruppert and Byron Gregory on electric guitar, Maurice White on percussion, and Robyn Smith on synthesizers and drum programming. CD