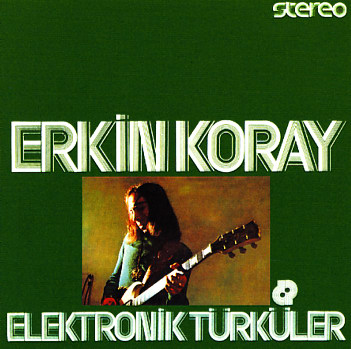 A masterpiece of Turkish psychedelia – and quite possibly the greatest album ever from Turkish psychedelic maestro Erkin Koray – a mad blend of sounds that definitely lives up to its "elektronik" title! Most numbers feature a weird blend of electric guitar and baglama – used in a style that's similar to Koray's earlier Arabesk recordings, but in ways that are often more tripped out and free-thinking – almost in a groove that's similar to late 60s blends of Eastern influences and progressive rock in the US and Europe – but even wilder and weirder throughout! There's a bit of vocals on the set, but the instrumentation dominates – and titles include "Sir", "Karli Daglar", "Cemalim", "Inat", "Hele Yar", "Turku", and "Korkulu Ruya".  © 1996-2020, Dusty Groove, Inc.
(Out of print.)

Ziggy Stardust & The Spiders From Mars (with bonus tracks)
Ryko, 1973. Used
CD...$6.99
Arguably one of the greatest rock and roll albums of all time – and the key flowering of the partnership between David Bowie and Mick Ronson! The guitars here are heavy – so much so that the record's always crossed over big with crowds who are always suspicious of Bowie's artier work ... CD

Messiah
RCA/Real Gone, 1971. Used Gatefold
CD...$9.99
David Axelrod takes on Handel's Messiah – and the result is an amazingly complex set of music – very similar to his earlier albums on Capitol Records, and his Warner work with the Electric Prunes! If you love the Axe, you'll find plenty to love here – spare, dark orchestrations, ... CD

We Be All Africans
Strut (UK), 2016. Used
CD...$9.99
Legendary reedman Idris Ackamoor is strongly back in action – working here with a new version of his classic Pyramids group from the 70s – with a groove that's every bit as righteous as their classic albums from back in the day! In truth, Ackamoor has been going strongly over the ... CD