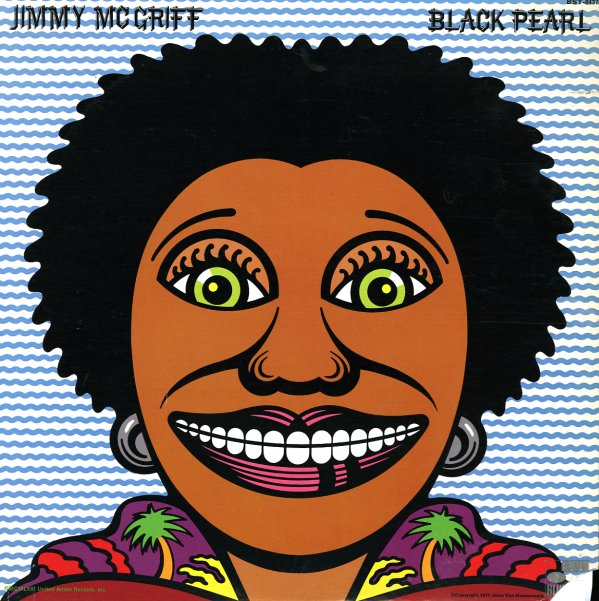 One of the most hard-hitting Jimmy McGriff albums of the 70s – a raw live date recorded in Newark – and a set that's a perfect bridge between the sharp soul of his Sue Records sessions and his later funk to come! The whole thing's got a gritty vibe the really recalls the sound of a Hammond combo in a small club back in the day – a sense of recording that's different than the usual Blue Note record, and we mean that in a good way! Future Groove Merchants Fats Theus and O'Donel Levy are both on the record – the former on tenor, the latter on guitar – and Jimmy gets plenty of room to really open up and soar on the Hammond. The group also features the lesser-known Ronald White on trumpet and Joseph Morris on alto – and titles include "In A Mellow Tone", "Groove Alley" and "Man From Bad" – and a nice cover of "Ode to Billie Joe"!  © 1996-2022, Dusty Groove, Inc.
(Liberty/UA pressing. Cover has a split spine, a name in pen, and a trace of a price sticker.)

Movin Upside The Blues
Jam, 1981. Very Good+
LP...$4.99
Later work by McGriff – back in a straight soul jazz style, ala his earlier 60s work, cut perhaps in a mellower tone, like some of his more laidback albums for Solid State. Players include Harold Vick, Bill Easley, Bill Hardman, and Jimmy Ponder – and titles include "All Day ... LP, Vinyl record album

Red Beans
Groove Merchant, 1976. Near Mint- Gatefold
LP...$24.99
Jimmy McGriff picks up a few more keyboards than straight Hammond organ – but that's ok with us, given the great results of the set! The album's got McGriff working on electric piano and clavinet alongside the organ – plus supporting arrangements from Brad Baker, in that fuller, Kudu-st ... LP, Vinyl record album

Step 1
Solid State, Late 60s. Very Good Gatefold
LP...$7.99
A pretty darn lively session from Jimmy, and one that features a tight combo that includes Larry Frazier on guitar and Fats Theus on tenor. The group grooves on some nice long tracks (longer than most of Jimmy's other Solid State session), with a tight rolling soul jazz groove that brings up the ... LP, Vinyl record album