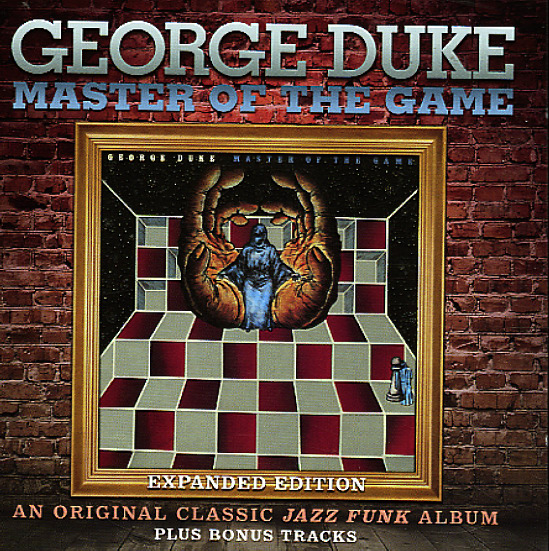 Master Of The Game (with bonus tracks)

A late 70s classic from jazzy funk master George Duke! Master Of The Game is an excellent mix of jazz, smooth soul, and Latin riffing – really a perfect blend of styles that shows not only how far George's sound had progressed throughout the 70s, it also charts the development of the California scene during the late 70s. George has musical help from Ray Obeido, Roland Bautista, and Sheila E – plus vocals by Lynn Davis, Josie James, and Napoleon Brock. The tracks have a smooth sound that works perfectly with Duke's best keyboard approaches – subduing his tenency to "rock out" a bit, but bringing forward his classic ability to hit a stone mellow groove. Titles include "I Want You For Myself", "Every Little Step I Take", "Look What You Find", "I Love You More", "Dog Man", and "Games". This Soulmusic.com edition includes 2 bonus tracks: "I Want You For Myself (US Single Edit) and "Every Little Step I Take (US Single Edit)".  © 1996-2021, Dusty Groove, Inc.

Torrid Zone – The Vertigo Recordings 1970 to 1975 (Elastic Rock/We'll Talk About It/Solar Plexus/Belladonna/Labyrinth/Roots/Under The Sun/Snakehips/Alley Cat) (6CD set)
Vertigo/Cherry Red (UK), Early 70s. New Copy 6CD
CD...$44.99
Seminal sounds from trumpeter Ian Carr and his Nucleus group of the early 70s – maybe one of the few jazz rock groups that was ever able to work with a fair bit of jazz in their sound! Unlike his contemporaries, who often started in rock first, then added some horns – Carr was already ... CD