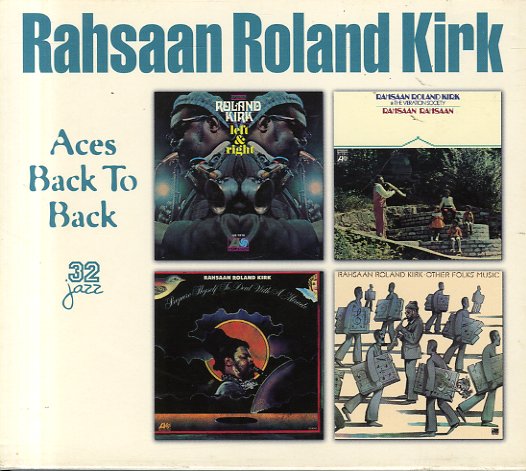 Nice one! A whopping 4CD set that brings together 4 of Roland Kirk's best late albums for Atlantic! Left & Right is an undisputed classic, and has Roland leading a large group of musicians through a haunting batch of complicated tracks that clearly illustrate his much-heralded concept of Black Classical Music. Snippets of this conception appear also on the albums Rahsaan Rahsaan and Prepare Thyself – although these also have Roland playing some other odd off-kilter numbers, in his usual insane style. Other Folks Music rounds up the set, and the album's an underrated gem that has a bit straighter sound than other Kirk albums, but also some incredibly warm, lyrical, imaginative jazz – played by Roland and some extremely well-chosen bandmates that include Trudy Pitts, Hilton Ruiz, and Richard Williams. A whopping batch of tracks – and at this price, a great way to get 4 CDs by one of our favorite jazz artists ever!  © 1996-2022, Dusty Groove, Inc.
(Out of print.)

Dog Years In The Fourth Ring (Rare Live Material & Natural Black Inventions – Root Strata)
32 Jazz, 1960s/1997. Used 3 CDs
CD...$13.99
One of the greatest contributions made by the 32 Jazz label so far has been the rich amount of classic Roland Kirk material they've released on the market. The best of Kirk's work has been out of print for years, and like the folks at 32 Jazz, we think that's a darn shame – which is why we're ... CD

Breakthrough (32 Jazz)
32 Jazz, 1972. Used
CD...$14.99
One of the last great albums that Hank Mobley ever cut! Although Mobley's 70s output was nothing compared to his 60s Blue Note work, this 1972 session for Cobblestone/Muse is a winner, and features the aging tenorist co-leading a crack quintet with Cedar Walton, and featuring Billy Higgins, Sam ... CD

Separate But Equal – Case Of The 3 Sided Dream/Part Of The Search
32 Jazz/Atlantic, Mid 70s. Used 2 CDs
CD...$9.99
A 2 CD set that features two of the more enigmatic Atlantic Records jazz sides from the 70s! Case Of The 3 Sided Dream is a great 70s album by Roland Kirk – one that features him working on a lot of short tracks, in a pretty crazy style! A number of the tracks feature Kirk's uniquely quirky ... CD

Layers (32 Jazz pressing)
Atlantic/32 Jazz, 1973. Used
CD...$14.99 18.99
This might well be the best album that Les McCann ever cut during the 70s! It's got some killer electric piano riffs, of the sort that are being sampled heavily today by the kids, and which are getting his music to a whole new generation. The tracks have a tight spacey funk sound, and they don't ... CD