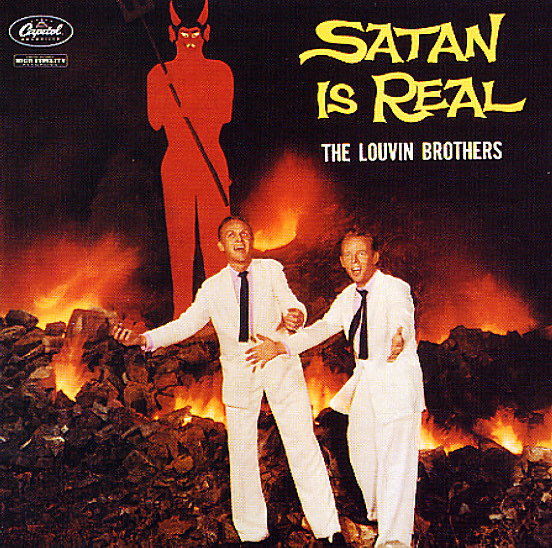 The soul saving, Satan deterring classic by The Louvin Brothers – plus the excellent Handpicked Songs compilation of Louvin tracks lovingly selected by an eclectic group of indebted artists – in this great 2CD set from Light In The Attic! Satan Is Real is a fantastic record of country harmony spirituals, cut by the legendary Ira and Charlie Louvin, during the height of their years at Capitol. The record's a treasure all the way through – from great cuts like "Satan is Real", "The Drunkard's Room", and "Dying From Home, And Lost" – to the groovy cover that has the Louvins standing next to a flaming pile of garbage with a statue of Satan! The real deal! Handpicked Songs is amazing music from the greatest chapter of the legendary Louvin Brothers – the kind of work that's made them a legend for generations! The set features Louvin classics chosen by a reverent group of singers and songwriters that really run the gamut – Dolly Parton, Beck, Kris Kristofferson, Chris Hilman, Emmylou Harris, Will Oldham, Zooey Deschanel, The Black Angels, Mark Lanegan, M Ward, and Jim James – but all artists who have been undeniably influenced by Ira and Charlie Louvin, and their way of melding melancholy harmonies into something that goes way beyond everyday country music! The packaging is great – very much up to the Light In The Attic standard – and titles include "Almost Persuaded", "My Baby's Gone", "I See A Bridge", "Knoxville Girl", "Great Atomic Power", and "Alabama".  © 1996-2021, Dusty Groove, Inc.