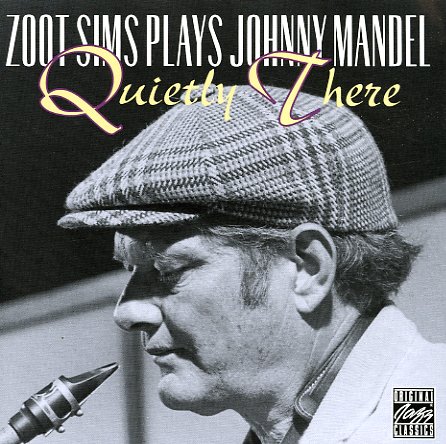 Zoot Sims plays the music of Johnny Mandel – a wonderful combination that makes the record a real standout in Sims' career from the time! The tunes all have a really well-penned quality – that mix of heartfelt and groovy that Johnny Mandel did so brilliantly back in the 60s – often for larger soundtrack modes, but with a sense of feeling that makes them work even better in a small group lineup like this. Of course, it helps that Zoot's raspy tone is leading things off, in a well-recorded setting – and the other players in the group have a cohesive energy that's different than some of the other Pablo dates of the time – more serviceable swingers letting the lead man get all the best space on the tunes. Players include Mike Wofford on piano, Chuck Berghofer on bass, Nick Ceroli on drums, and Victor Feldman on vibes and percussion – and titles include "Zoot", "Quietly There", "Cinnamon & Clove", "Low Life", "Emily", and "A Time For Love".  © 1996-2022, Dusty Groove, Inc.
(XRCD24 pressing.)

That Old Feeling
Chess, 1956. Used
CD...$6.99
Two obscure quartet sessions from Zoot Sims – and nice ones too! The group's great – with Johnny Williams on piano, Gus Johnson on drums, and Knobby Totah on bass – and Zoot's blowing in an unfettered setting that reminds us a bit of Sonny Stitt in similar settings at the same ... CD