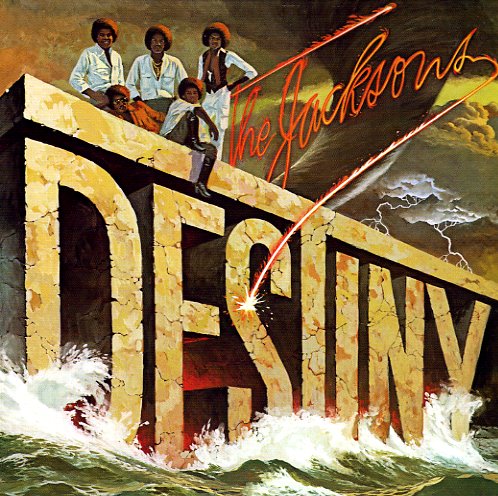 Also available
Jacksons — Destiny ... LP 13.99
A heavy groove and a heady title that points the way towards Michael Jackson's soon-to-be legendary solo career – all served up in a batch of tracks that resonate nicely with the Off The Wall groove! The sound here really isn't disco or club, but it's a nicely upbeat groove that shows The Jacksons at the top of their game – tightly stepping and often highly rhythmic – and striking a great balance between strong lead vocals and some of the sweeter harmonies that got them going in the past. Titles include the sublime groovers "Blame It On The Boogie" and "Shake Your Body (Down To The Ground)", plus great sleepers like "All Night Dancin", "Bless His Soul", "Things I Do For You" and "That's What You Get For Being Polite". CD features 2 bonus tracks – "Blame It On The Boogie (John Luongo disco mix)" and "Shake Your Body (John Luongo disco mix)".  © 1996-2022, Dusty Groove, Inc.
(Out of print and still sealed. Small cutout hole through case and barcode.)

Victory
Epic, 1984. Used
CD...$3.99 5.99
Michael Jackson's last album with his famous family – a set of electric 80s soul that's a bit different than Jackson's well-known solo work! In a way, the later Jacksons albums almost feel like a place where Michael can try out some ideas that don't fit as tightly into the overall sound of ... CD

Jacksons
Philadelphia International, 1976. Used
CD...$9.99
Great stuff – and a key link between the early work of the Jackson 5 on Motown and Michael's later grooves with Quincy Jones! The Gamble/Huff team give the group a smooth sweet sound – definitely in a dancefloor mode, with some of the bassy riffs of Michael's Off The Wall album, but ... CD

Central Heating
Epic, 1978. Used
CD...$8.99
The second album by Heatwave – and a great effort that's almost as perfectly sublime as the first! Despite their UK origin, these guys really give American late 70s soul a run for its money – hitting in a sweetly compressed sound that fuses the vocals, keyboards, and grooves together ... CD

Stand!
Epic, 1969. Used
CD...$4.99 (LP...$19.99)
Hard to find a stronger early album by Sly Stone – as this one has him still funking hard, but also getting his soul bag together a bit more – hitting some really righteous vibes that mix together politics and partying in an incredibly seductive way! The album's filled with anthemic ... CD

Givin' It Back
T Neck/Epic, 1971. Used
CD...$16.99
A very weird, but very beautiful album by the Isleys – one in which they move into a folksy rock groove, and play acoustic guitars in long spiralling soulful versions of some of their favorite rock hits! The sound's a bit like Terry Callier or Bill Withers, but it's also still got that sexy ... CD

There's A Riot Goin' On
Epic, 1971. Used
CD...$2.99
A wonderful album from Sly and crew – moving way past the straight funk approach of earlier records, into a complicated crossover soul style that's filled with warmth and righteousness! Despite the political tone implied by the "riot" in the title and the co-option of the American ... CD