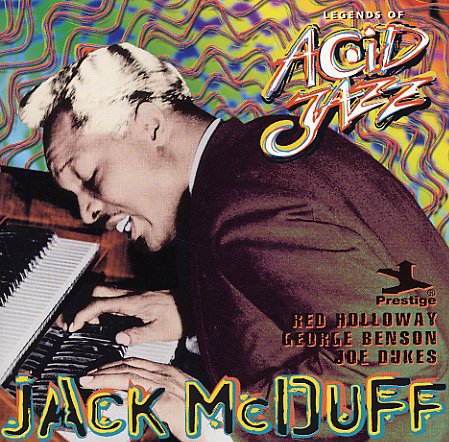 A selection of tracks by Jack McDuff that were originally recorded in a few different sessions – then spread about some of his best (and rarest) albums of the mid 60s. Nearly all of the tracks feature Jack's classic quartet with Red Holloway, George Benson, and the great Joe Dukes on drums – and the few that don't have some superb large group arrangements by Benny Golson that provide a wildly swinging platform for Jack's groovy solos. Titles include "Scufflin", "Lew's Piece", "Our Miss Brooks", "From the Bottom Up", and "Lexington Avenue Line". Lots of tracks, and a screamin' organ jazz set all the way through!  © 1996-2021, Dusty Groove, Inc.
(Out of print.)

Another Real Good'Un (32 Jazz)
Muse/32 Jazz, 1989. Used
CD...$4.99
A nice little album of soul jazz organ tracks by Jack McDuff, and proof that he was always still burning strong! Unlike other Hammond players, who got a bit sloppy in later years, McDuff always kept things interesting, and managed to come up with some creative arrangements and soulful solos that ... CD

Walkin' (20 bit remaster)
Prestige, 1954. Used
CD...$11.99
As classic an early album by Miles Davis as you can find – truly filled with the "all star" players billed in the title, and a session that has the sharpness of Davis' bop work for Blue Note, yet also lets him stretch out in a slightly more relaxed format! The album features Miles ... CD