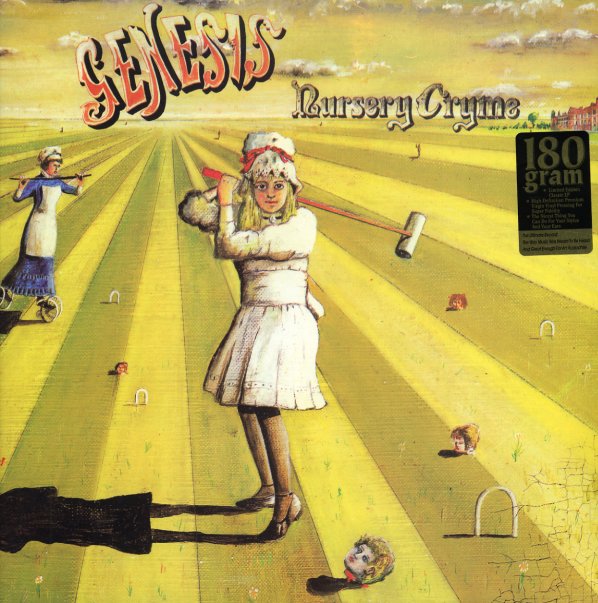 An early masterpiece from Genesis – the kind of visionary record that really set them apart from the rest of their generation – an incredible building-up in sound from their previous two albums, and proof that Peter Gabriel's talents were finally getting focused in the right direction! Keyboards cascade heavily – hitting Yes-like proportions, but with more structure, too – as time changes abound, scene changes match the energy of theme-changes – and the whole album falls into place beautifully, but with plenty of surprises along the way. Every song is a compelling little story – from the leadoff "Musical Box", to the spooky "Return Of The Giant Hogweed", and the playful "Harold The Barrel" – with sweeter moments that include "For Absent Friends" and "Harlequin" – just hinting at the crossover ballad style the group would embrace later, but without any of the cloying commerciality at all.  © 1996-2022, Dusty Groove, Inc.
(US pressing with mad hatter labels. Cover has some surface and edge wear.)

Selling England By The Pound
Charisma, 1973. Very Good+
LP...$19.99
An album we come back to more and more over the years – a bit more subtle than some of the other Gabriel-era Genesis records, but in a good way! Titles include "Aisle Of Plenty", "More Fool Me", "Firth Of Fifth", "Dancing With The Moonlit Knight", ... LP, Vinyl record album

Music Inspired By Lord Of The Rings
Charisma, 1972. Very Good+
LP...$11.99
A legendary album of instrumental music inspired by the Lord Of The Rings – maybe not the all-out Frodo Fest you might expect, but a set that's been pretty important to fans of JRR Tokien over the years – especially in the years before DVDs and other mass-market versions of his ... LP, Vinyl record album