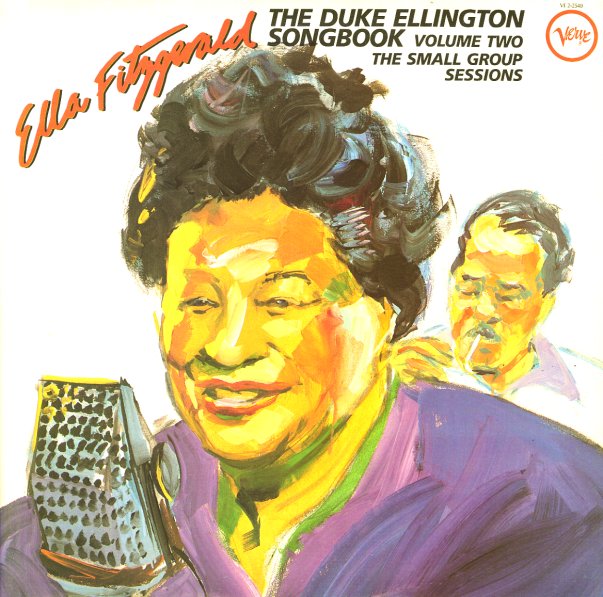 Small combo work – with Ben Webster on tenor sax, Oscar Peterson on piano, Barney Kessel on guitar, and even a bit of jazz violin from Stuff Smith!  © 1996-2022, Dusty Groove, Inc.

Ella Abraca Jobim – Ella Fitzgerald Sings The Antonio Carlos Jobim Songbook
Pablo, 1981. Very Good+ 2LP Gatefold
LP...$16.99
A late session from Ella – but a nice one! The setting is bossa – as you could guess by the title – and the music is handled with a smooth west coast Brazilian approach – arrangements by Erich Bulling, and players that include Oscar Castro-Neves, Paulinho Da Costa, Alex ... LP, Vinyl record album

Close Enough For Love
Verve, 1989. Very Good+
LP...$19.99
Accompanied by Charles Ables on bass, Steve Williams on drums, and with some nice guest tenor work from Buck Hill! Titles include "Get Out Of Town", "Beautiful Friendship", "I Got Lost In His Arms", "Come Fly With Me", and "So I Love You". LP, Vinyl record album

Arthur Prysock & Count Basie
Verve, 1965. Near Mint-
LP...$7.99
An incredible pairing of two important 60s talents – magnificent vocals from Arthur Prysock, and some of the best backings he ever received – thanks to Basie! LP, Vinyl record album

Thompson Touch
Verve, Late 50s. Very Good+
LP...$16.99
A really wild set of vocal group dynamics – featuring one quartet with backing from Oscar Peterson on piano and Barney Kessel on guitar – and another that is an eighteen-member lineup, with wild arrangments from Bill Thompson! LP, Vinyl record album