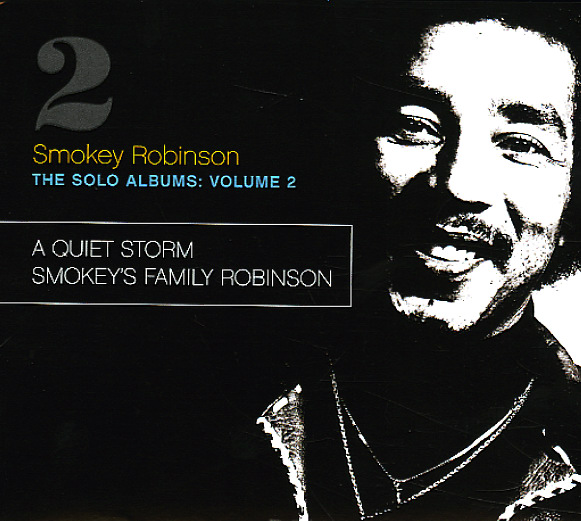 A pair of great Smokey Robinson solo albums – the uber-classic Quiet Storm and the comparably overlooked gem Smokey's Family Robinson – paired up in single set by Hip-O Select! Quite Storm is straight up incredible – a record that should be in every household! Smokey breaks free of the group sound of the Miracles albums – hitting a whole new mode, and inventing the "Quiet Storm" radio format along the way! The title cut – "Quiet Storm" – is a majestic long-building track that's as important to mellow soul as Larry Mizell's work was to jazz funk at the same time, and it's got a similar layering effect that has sounds building and spinning, with a bit of sound effects, great keyboards, and cool moogy touches that recall some of Bobbi Humphrey's best work for Blue Note, but filtered through a mellow ballad style. The whole album's great, and other tracks include "Baby That's Backatcha", "The Agony & The Ecstasy", "Coincidentally", and "Wedding Song". Smokey's Family Robinson finds Smokey exploring rather than simply setting out to continue riding the waves made by Quiet Storm. There's bits of dancefloor funk, pared down keyboard soul, spacey jams and a sweet ballad or two – all with Smokey's soul strirring vocals in peak form. Titles include "When You Came", "Get Out Of Town", "So In Love", "Open", "Castles Made Of Sand" and more – plus and this CD includes the bonus, non LP single "Old-Fashioned Man". Comes with a nice booklet with restored artwork and liner notes by author Peter Doggett, culled from new interviews with Smokey himself!  © 1996-2021, Dusty Groove, Inc.
(Out of print, sticker over barcode.)

Feel The Fire – The 20th Century Collection (Whatcha Gonna Do With My Lovin'?/Sweet Sensation/Stephanie plus bonus tracks)
20th Century/Hip-O Select, Late 70s/Early 80s. Used 2 CDs
CD...$28.99
A nice anthology of all the sweetness Stephanie Mills recorded for 20th Century at end of the 70s and beginning of the 80s – the Whatcha Gonna Do With My Lovin'?, Sweet Sensation and Stephanie albums in full – plus bonus non-LP and 12" singles in a great 2CD set on Hip-O Select! ... CD