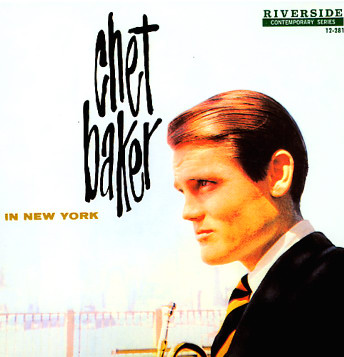 Also available
Chet Baker — Chet Baker In New York ... LP 24.99
Chet Baker — Chet Baker In New York (180 gram pressing) ... LP 26.99
Quite a great session for Chet Baker – one that has him recording in New York, with a hip lineup that includes some incredibly soulful players! The tunes on the set feature Chet in either quartet or quintet formation – working with Johnny Griffin on tenor, Al Haig on piano, Paul Chambers on bass, and Philly Joe Jones on drums. Tracks are longish, and the sound is much more in the mode of Riverside at the time, than the sound of Chet's earlier Pacific Jazz records – and Chet holds his own nicely in this company, giving a hint of the style to come in a few more years. Titles include "Fair Weather", "Hotel 49", "When Lights Are Low", "Solar", and "Blue Thoughts". CD features 1 bonus track.  © 1996-2023, Dusty Groove, Inc.
(Out of print. Includes slipcase!)