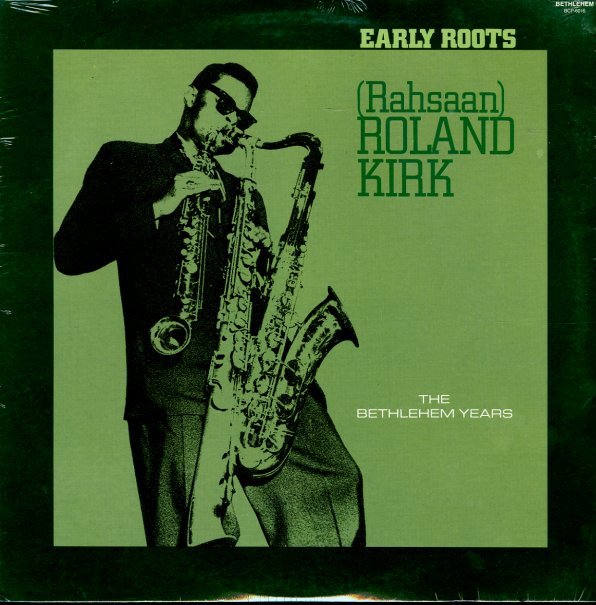 Excellent early work from Roland Kirk – not as groundbreaking as later sessions, but still filled with fire and imagination, and proof that the famous blind player was a genius even at an early age! Kirk plays alto, tenor, and soprano – and on all tracks, he plays them in his unique "3-in-1" style, in which he's actually blowing all horns at the same time! The result is an incredible sound, unlike anyone else we can think of – and it's an amazingly raw tone that still swings very hard. Players include Jimmy Madison on piano, Carl Pruitt on bass, and Hank Duncan on drums – a really rootsy quartet that helps Roland hit a really gutbuckety sound on the record. Titles include "Triple Threat", "Slow Groove", "Roland's Theme", "Easy Living", "The Nearness Of You", and "A La Carte".  © 1996-2022, Dusty Groove, Inc.
(Out of print.)

Introducing Roland Kirk
Chess/Universal, 1960. Used
CD...$8.99 (CD...$4.99)
Despite the fact that the title's "Introducing Roland Kirk", it's not actually Kirk's first album – but it is a heck of a smoker with a very unusual sound! The session features Roland with a Chicago group that includes Ira Sullivan on trumpet, Don Garrett on bass, and Ron Burton on ... CD

Domino
Verve, 1962. Used
CD...$12.99
A key early album from reedman Roland Kirk – at set that really has him strongly finding his voice in jazz, and transforming most of modern music in the process! The set's a perfect illustration of the way that Roland could swing with soul, yet still reach out with bold new ideas too – ... CD

Introducing Roland Kirk
Chess/MCA, 1960. Used
CD...$4.99 (CD...$8.99)
Despite the fact that the title's "Introducing Roland Kirk", it's not actually Kirk's first album – but it is a heck of a smoker with a very unusual sound! The session features Roland with a Chicago group that includes Ira Sullivan on trumpet, Don Garrett on bass, and Ron Burton on ... CD

Kirk In Copenhagen
Mercury, 1963. Used
CD...$7.99
A rare slice of work by Roland Kirk from his early years – a great live set recorded in Europe in the mid 60's – done in a looser mode than his studio sessions from the time! Kirk's playing his usual array of incredible horns – tenor, stritch, flute, nose flute, and manzello ... CD