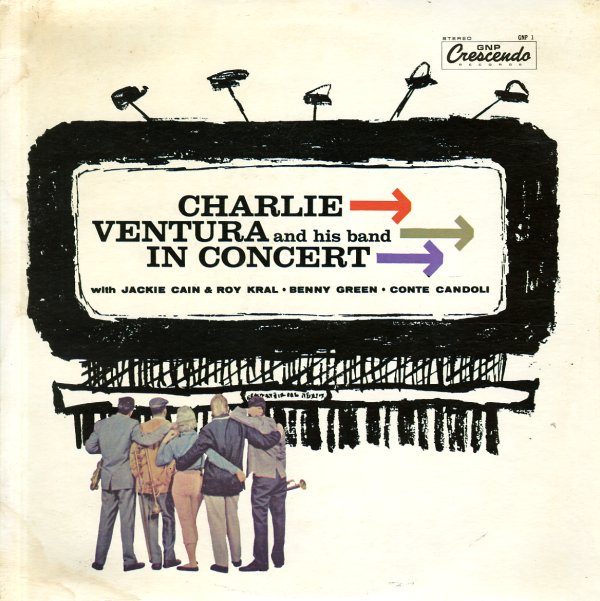 Charlie Ventura & His Band In Concert

A perfect example of why the Charlie Ventura group was one of the most popular live acts on the west coast scene of it's day! Producer Gene Norman really manages to capture the charm of the group in all its glory – recorded live in a lineup that features Conte Candoli on trumpet, Bennie Green on trombone, and Boots Mussulli on alto – plus some great scatted vocals from the team of Jackie & Roy! The recording's got a natural, flowing quality that really gets at the liveness of the set – and the horns come together beautifully throughout – in that wonderful mix of bop and swing that was the Ventura trademark! Titles include "Boptura", "Flamingo", "Birdland", "Dark Eyes", "High On An Open Mike", and "Lullaby In Rhythm".  © 1996-2023, Dusty Groove, Inc.
(70s issue. Cover has a cutout hole and light wear.)

Best Of Max Roach & Clifford Brown In Concert
GNP, 1954. Near Mint-
LP...$24.99
It's hard to overstate the influence of Max Roach and Clifford Brown on the west coast scene of the 50s – as the two players helped draw out the bop sound of LA that was quickly getting lost in the cool jazz shuffle of the time, and gave it a strength and focus that not only made the group ... LP, Vinyl record album

Frank Morgan
GNP, Mid 50s. Very Good+
LP...$19.99 29.99
Seminal session that was virtually one of the only west coast attempts to replicate the famous "cubop" mix of bebop and Latin that had been evolving over the years in the New York scene. Machito percussionists like Jose Mangual and Ubaldo Nieto join a west coast group that includes alto ... LP, Vinyl record album

Southern Comfort
Blue Thumb, 1974. Very Good+ 2LP Gatefold
LP...$7.99
A landmark album from The Crusaders – and a set that really has them sweetening up their groove with lots of tasty R&B touches! The guitar's a bit more pronounced in the mix on this one – setting up some tightly funky rhythms that almost seem to free up the horns even more for solo ... LP, Vinyl record album