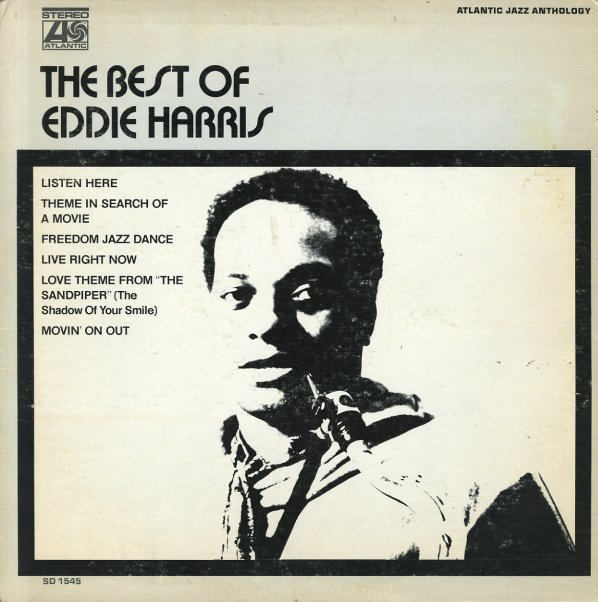 A collection of 60s recordings for Atlantic, starting in 1965 with Cedar Walton on piano, Ron Carter on bass, and Billy Higgins on drums, and later in 1967 with Jodie Christian on piano, Melvin Jackson on bass, Richard Smith on drums, and Ray Barretto on percussion, and a 1968 date with Heywood Henry on baritone, Jimmy Owens on trumpet, Charles Rainey on bass, and Grady Tate on drums. Titles include "Listen Here", "Theme In Search Of A Movie", "Freedom Jazz Dance", "Live Right Now", "Love Theme From The Sandpiper", "and "Movin' On Out".  © 1996-2022, Dusty Groove, Inc.
(Green and red Rockefeller label stereo pressing. Cover has a cutout notch.)

Exodus To Jazz
Vee Jay, Mid 60s. Very Good-
LP...$2.99
One of the true hit jazz albums of the 60s, and a record that's still pretty darn incredible today! Who'd have thought that a jazz recording of the theme to the film "Exodus" could have been such a hit? It was, and the way Eddie handled it forever transformed the face of jazz. Eddie ... LP, Vinyl record album

Eddie Harris Goes To The Movies
Vee Jay, Early 60s. Near Mint-
LP...$11.99
Forget the title – which sounds like a bit of a gimmick – as this is a fine fine Eddie Harris album! After the success that Vee Jay had with Eddie Harris' huge hit version of "Exodus", they cut this album of Eddie playing movie themes – like "Green Dolphin ... LP, Vinyl record album