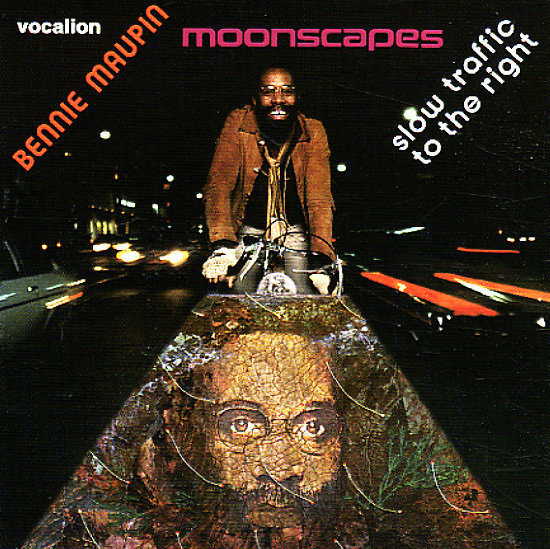 Slow Traffic To The Right/Moonscapes

A pair of funky jazz sets from Bennie Maupin – '77's Slow Traffic To The Right and '78's Moonscapes – together in a single set! Slow Traffic To The Right is Maupin's first LP for Mercury, and a great bit of spiritual funky jazz that recalls a lot of the sound of his work with The Headhunters. The first track, "It Remains to Be Seen", is an excellent groover, with some very dark keyboard work by Patrice Rushen, and the rest of the tracks are pretty great too. Pat Gleeson produced and plays synth on the LP, and the cuts include "Quasar", "You Know the Deal", "Water Torture", and "Lament". Next up is Moonscapes – a really great solo set from the great Bennie Maupin – part of an excellent run of records as a leader, cut during the stretch when he was riding to great fame with The Headhunters! The vibe here is deeper and more spiritual than his work with that group – still somewhat influenced by the Herbie Hancock electric years – with loads of wonderful keyboards from Bobby Lyle – but also stretched out with these spacious solos from Bennie on soprano, tenor, bass clarinet, and flute! Maupin also throws in a bit of electronics, too – as does the mighty Pat Gleeson, who produced the record, and also adds in some great keyboard work to give the whole thing a spacey edge that really lives up to the title and cover. Titles include "Nightwatch", "Sansho Shima", "Anua", and "Just Give It Some Time".  © 1996-2020, Dusty Groove, Inc.