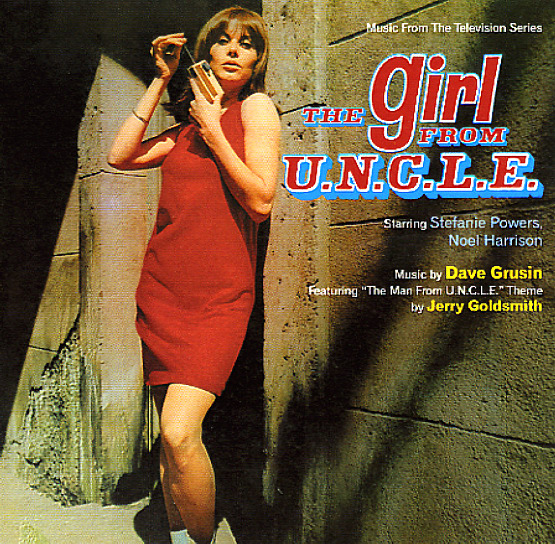 One of the greatest spy soundtracks of the 60s – a very groovy batch of tracks written for Stefanie Powers' brief TV show, The Girl From UNCLE! The music here is better than the male version of the UNCLE franchise – hip 60s spy themes, done in a groovy style for the television audience – often a cool blend of swirling strings, jazzy orchestrations, and some very hip rhythms! Dave Grusin penned the music, and Teddy Randazzo arranged – bringing his 60s soul background into the work in a really great way – emphasizing the grooves even more than on other records of this nature, in a way that's made the set very sought after in the crate-digging scene. There's plenty of nice 60s elements – keyboards, wordless vocals, funky flute, and other hip effects – and titles include "Movin On", "Out Of The Frying Pan", "The Girl From UNCLE", "Sneaky Search", "The Countess", and "Bomb Scare".  © 1996-2021, Dusty Groove, Inc.
(Original pressing! Cover has a cutout hole in the corner, and shrinkwrap is slightly open in two corners, and much more on the back.)