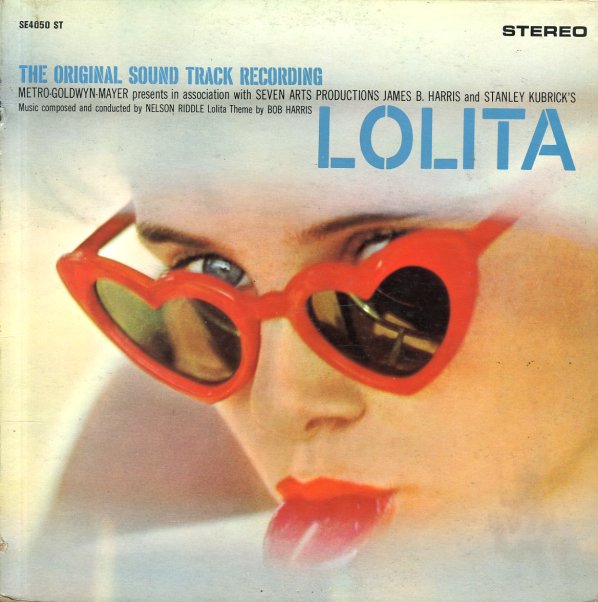 A very groovy little soundtrack for this original film version of Lolita – directed by Stanley Kubrick with a screeplay by Nabokov himself. The album sports the famous "Lolita Theme", with a weird vocal part that goes "nya nya", and which became something of a minor instrumental hit at the time. About a third of the album is variations on that theme, and the rest of the album features darker tunes that get at the inherent sadness of the movie – standing in stark contrast next to the sillier theme numbers. Tracks include "Love Theme From Lolita", "Two Beat Society", "Thoughts Of Lolita", "School Dance", "Quilty's Theme", and "Lolita Ya Ya".  © 1996-2022, Dusty Groove, Inc.
(Mono pressing in a gatefold cover, with light wear, 4 inch seam splits, and a small peeled spot from sticker removal.)

Rogues – Original Soundtrack
RCA, 1964. Very Good+
LP...$2.99
A wonderful lost Nelson Riddle soundtrack – scored for the "gentlemen criminal" show The Rogues, which ran briefly on NBC during the mid 60s – starring Charles Boyer, Gig Young, and David Niven! The work is some of our favorite by Riddle during the period – lightly ... LP, Vinyl record album

Aviator
MGM/Varese, 1985. Near Mint-
LP...$7.99
A mid 80s film that's scored by Dominic Frontiere in a mix of modes – some lofty orchestral pieces that are positively airborne in their sound and structure, with a great sense of American pride and drama – and a few more period pieces to set the scene for the 1920s narrative. Titles ... LP, Vinyl record album

Aviator
MGM/Varese, 1985. Near Mint-
LP...$7.99
A mid 80s film that's scored by Dominic Frontiere in a mix of modes – some lofty orchestral pieces that are positively airborne in their sound and structure, with a great sense of American pride and drama – and a few more period pieces to set the scene for the 1920s narrative. Titles ... LP, Vinyl record album

Dark Of The Sun – Original Soundtrack
MGM, 1968. Near Mint-
LP...$29.99
A pretty nice action soundtrack from French composer Jacques Loussier – not as all-out groovy as some of his other work from the 60s, but filled with some nice touches that include jagged instrumentation over orchestrations, creating some jazzed-up bits that feel more like 60s crime jazz than ... LP, Vinyl record album

Africa
MGM, Mid 60s. Near Mint-
LP...$2.99
A pretty serious orchestral score by Alex North, designed to accompany an ABC documentary about the changes in Africa during the 60s. Given that the documentary takes a look at the emerging politics and cultures in post-colonial Africa, it's amazing how white and western the soundtrack is – ... LP, Vinyl record album

Che!
Tetragrammaton, 1968. Very Good
LP...$4.99
A pretty cool score by Lalo Schifrin – one that's Latin, but not in the same bossa style as his other 60s albums. The film – as you can imagine – is about Che Guevara, and it stars poor Omar Sharif, who was forever pegged to play the "ethnic" star in films like this. ... LP, Vinyl record album