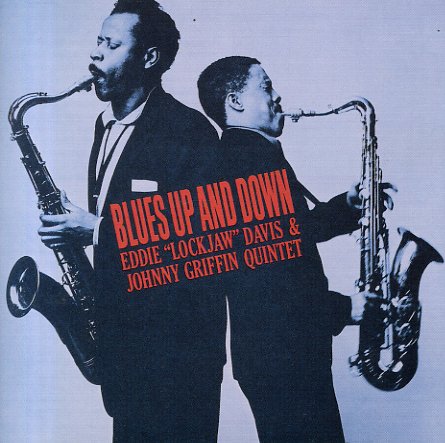 During the early 60s, tenor giants Johnny Griffin and Eddie Lockjaw Davis teamed up to cut a series of monster LPs that are still defined today as some of the best examples ever of a twin tenor frontline! The records matched hardbop solo intensity with tight soul jazz grooving – and nobody was better equipped to handle such a combo as Griff and Lockjaw. Two of those great LPs are pulled together for this CD – Blues Up & Down and Griff & Lock, both originally issued for the Jazzland label, and darn hard to find. Rhythm is by either Junior Mance or Lloyd Mayers on piano, plus Larry Gales on bass and Ben Riley on drums. Titles include "Hey Lock!", "Midnight At Mintons", "Good Bait", "Oh, Gee", "Layin On Mellow", and "Leapin On Lenox".  © 1996-2021, Dusty Groove, Inc.
(On Demand CDr pressing.)