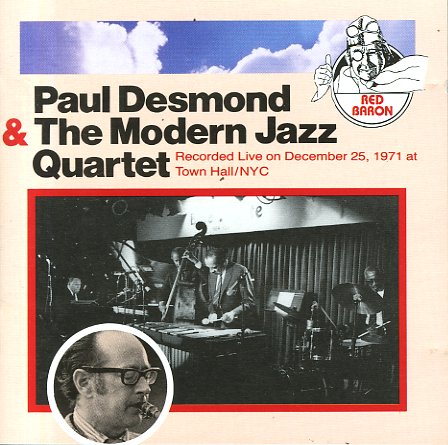 A rare pairing, and a great one too – as Paul Desmond joins the Modern Jazz Quartet for a unique live set from the early 70s – with a great sound that's even more wonderful than we expected! Desmond is always great no matter what the setting – but he sounds especially nice working here alongside the mix of piano and vibes offered by the MJQ – in a style that's subtle, but never as sleepy as some of their other records from the period, thanks to some sharper edges from Desmond. The alto sax really brings something new to this record – carving out snakey little lines that glow and glimmer with a nicely subdued soul – and in a way, the MJQ really just seem to be holding back in a role where they're Paul's accompanists, and not the main stars of the set. Titles include "Greensleeves", "Blue Dove", "You Go To My Head", "East Of The Sun", "Here's That Rainy Day", "Bag's New Groove", and "Jesus Christ Superstar".  © 1996-2022, Dusty Groove, Inc.
(Out of print.)