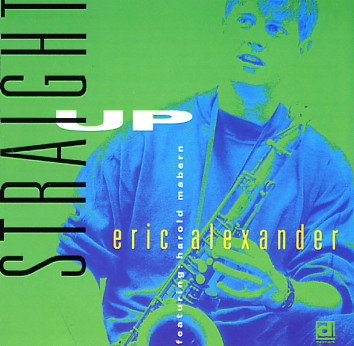 The recording debut of tenor saxophonist Eric Alexander – done at a time when he'd just finished some key woodshedding years on the south side of Chicago, and was poised to become one of the most important jazz voices of his generation! Even at this early point, Alexander's clearly one of the greats – a tenorist with confidence and creativity, and no cliches whatsoever in his sound – an instantly classic player who's well matched here with the incredible Harold Mabern on piano, in a generation-spanning partnership that would form the basis for a number of tremendous albums to come. Other players on the date include Jim Rotondi on trumpet, John Webber on bass, and George Fludas on drums – and titles are a well-balanced set of choices that include "Straight Up", "What Are You Doing The Rest Of Your Life", "Blues Waltz", "An Oscar For Treadwell", and "End Of A Love Affair".  © 1996-2021, Dusty Groove, Inc.
(Out of print, punch through barcode.)

Mr Lucky
Delmark, 2002. Used
CD...$6.99
A great one from Delmark – a set that features work from these two obscure Chicago small combo players – Othello Anderson on alto and Al Green on drums – with Odies Williams III on trumpet, and Leandro Lopez Varady on piano! CD

Lush Life
Prestige/OJC, 1957/1958. Used
CD...$1.99 (LP...$21.99)
Strong work from John Coltrane's early years as a leader – even if the album is sort of a collection of tracks that Trane recorded for Prestige, instead of a discreetly separate session! Side one features Coltrane's tenor in a spare setting with Earl May on bass and Art Taylor on drums ... CD