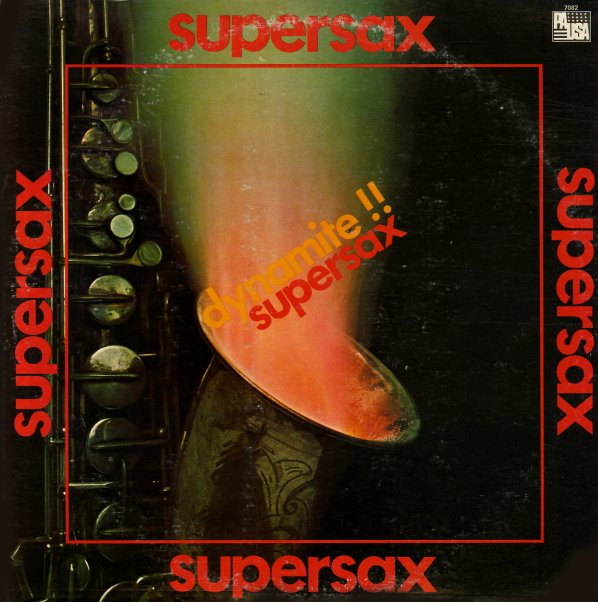 A looser, more free-swinging album than usual for Supersax – one that still has the group working with some key contributions from west coast jazz luminaries, but in a vibe that's almost more small combo than larger ensemble! The tracks here include a fair bit of Bud Powell and Charlie Parker numbers, but the arrangements are mighty fresh – open, and swinging with some hipper 70s touches, thanks to rhythms from a trio that features Lou Levy on piano, Fred Atwood on bass, and John Dentz on drums – players that are never locked into a strict bop mode. As with other Supersax albums, there's a brace of reed players working together at the front – Lanny Morgan on alto, Jack Nimitz on baritone, and both Jay Migliori and Don Menza on tenors – coming together as one voice on the solos, and getting some key help from Conte Candoli on trumpet and Frank Rosolino on trombone. Titles include "The Fruit", "Bambu", "Blues For Alice", "Tempus Fugit", "Parker's Mood", and a surprising, but great take on Antonio Carlos Jobim's "Wave".  © 1996-2022, Dusty Groove, Inc.
(Cover has light wear.)

Plays Bird (Original Master Recording)
Capitol/Mobile Fidelity, 1973. Near Mint-
LP...$11.99 18.99
A completely fresh take on the Charlie Parker aesthetic of the bop generation – updated for the 70s, but in ways that are still pretty classic overall! The group's a large one, but plays with a tightness that goes way past their gimmicky name – thanks to players who include Med Flory ... LP, Vinyl record album

Aura Will Prevail
MPS, 1975. Very Good
LP...$13.99
The aura here is spreading wide – as George Duke really grows his sound strongly from the early years, and takes hold of a whole host of cosmic influences! The record's one of Duke's biggest for MPS – a beautiful balance between jazzy fusion and spacey soul – served up with help ... LP, Vinyl record album

Latin Kaleidoscope (US pressing)
MPS/Prestige, 1968. Very Good+
LP...$28.99
One of the greatest records ever by this hip jazz ensemble – and one of their most unique! The record has the band grooving hard through two incredible suites of Latin music – Gary McFarland's "Latin Kaleidoscope" and Francy Boland's "Cuban Fever" – each of ... LP, Vinyl record album

Now Is The Time
MPS/PA USA, Early 70s. Near Mint-
LP...$14.99
US issue of a Monty Alexander set that was previously out on MPS as Love & Sunshine. The record features his groovy group with Ernest Ranglin on guitar, Eberhard Weber on bass, and Kenny Clare on drums. The bass playing's especially good, and there's lots of nice round funky moments in some of ... LP, Vinyl record album

Hub Of Hubbard
MPS, 1969. Very Good+ Gatefold
LP...$24.99
A classic European date from Freddie Hubbard – recorded right around the vintage of his Red Clay years, but with a sound that hearkens back more towards his Blue Note sessions of the mid 60s! There's a nicely angular feel to this set – that bold, modern quality that really set Hubbard ... LP, Vinyl record album

Tracks
MPS (Germany), 1969. Near Mint-
LP...$5.99 7.99
A solo sparkler from Oscar Peterson – recorded in a flurry of excellent late 60s recordings for MPS, and done in a warmly rhythmic mode that puts Peterson's solo work right up there in the ranks of Tatum and Garner! The production on the album is immaculate – done with a depth that ... LP, Vinyl record album

Motions & Emotions
MPS, 1969. Near Mint- Gatefold
LP...$11.99 14.99
Pure genius from Oscar Peterson – one of his finest moments ever! The record is very different than most of Oscar's over-recorded trio format ones – and features Claus Ogerman crafting some impeccable backings of lofty strings and compressed horns, creating a pillow of air that takes ... LP, Vinyl record album

Ben Webster Meets Don Byas (US pressing)
MPS, 1969. Sealed
LP...$13.99 16.99
Late work by Webster and Byas – playing here with backing by a European rhythm section that includes Tete Montoliu on piano and Peter Trunk on bass, plus American Albert Heath on drums. The tracks are mostly long and open – with the main focus on letting the two tenor giants solo as ... LP, Vinyl record album

Reunion Blues
MPS, 1971. Near Mint- Gatefold
LP...$14.99
The piano of Oscar Peterson meets the vibes of Milt Jackson – and the result is a wonderfully groovy set! We can't remember when the 2 players had worked together before in order to have such "reunion" – but they work together beautifully on this session, with Jackson's vibes ... LP, Vinyl record album