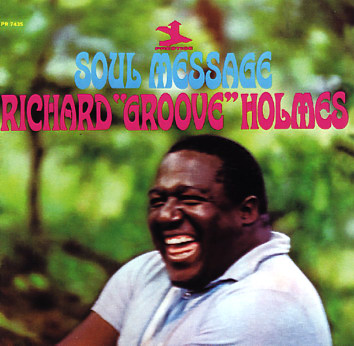 A key album in the career of Richard Groove Holmes – his first session ever for Prestige Records, and the one that yielded the monster crossover hit version of "Misty"! The sound here is much leaner and cleaner than Groove in his Pacific Jazz years – a tight trio approach that brings plenty focus on Holmes' soaring style on the Hammond – that way of holding a note that made his organ work instantly recognizable in the 60s, in a groove that really set the tone for plenty of spacious keyboard work to come from others who would cop his style! Players include Gene Edwards on guitar and Jimmie Smith on drums – but Groove's organ dominates the records, and clearly sets the tone for the rhythm with his amazing sense of space and timing! Titles include a 6 minute version of Groove's "Misty", plus "Groove's Groove", "Song For My Father", and "Soul Message".  © 1996-2021, Dusty Groove, Inc.
(Out of print.)