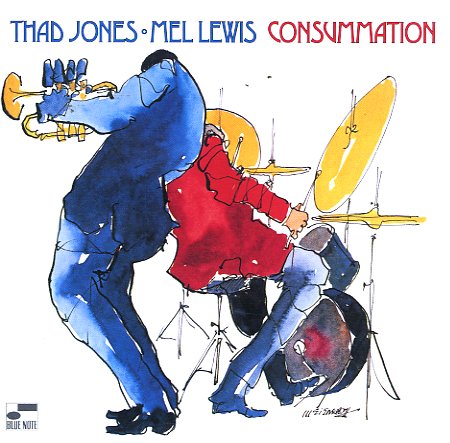 One of the greatest records ever cut by the Thad Jones/Mel Lewis Orchestra – way way more than a big band jazz session, and a fantastically hip batch of grooves that encompasses a wealth of styles! The Jones/Lewis group could sometimes sound a bit clunky and overhashed – but on this set, they've got a surprisingly lyrical approach – free-thinking and easily grooving, but with room for complicated solos and complex rhythms. All tracks are originals by Thad Jones – and players include Roland Hanna on electric piano, David Spinozza on guitar, and a host of great talents on reeds and brass. Titles include the sweetly funky cuts "Us" and "Ahunk Ahunk", plus the tracks "Dedication", "Consummation", "Tiptoe", and "Fingers".  © 1996-2022, Dusty Groove, Inc.
(70s black b label pressing.)

New Life
Horizon, 1976. Near Mint- Gatefold
LP...$4.99
A wonderful start to the second decade of this ultra-hip group – an ensemble who started to reinvent the sound of the big band in the late 60s, then only picked up more and more energy once time went on! Thad Jones and Mel Lewis are a hell of a pair – not only great leaders for a ... LP, Vinyl record album

Suite For Pops
Horizon, 1975. Near Mint- Gatefold
LP...$19.99
Large group backings, with a bit of vocals from Dee Dee Bridgewater – and titles that include "Meetin Place", "The Summary", "The Farewell", "The Great One", and "Only For Now". LP, Vinyl record album

Knucklebean
Blue Note, 1977. Very Good
LP...$16.99 (CD...$13.99)
Beautiful late Blue Note work from Bobby Hutcherson – laidback, warm, electric, and with a mixture of CTI funk and some of the more lyrical soul jazz work of his years with Harold Land! Part of the credit for the set should go to George Cables – who plays both acoustic and electric ... LP, Vinyl record album

Living Inside Your Love
Blue Note, 1977. Near Mint-
LP...$7.99
Earl Klugh's second album for Blue Note – and like the first, a nicely stripped-down album that we like a lot better than his later work! Klugh's sound and tone are still very pure here – set up in some nice small group arrangements by Dave Grusin, and recorded in a way that brings out ... LP, Vinyl record album

Flute-In (Applause pressing)
Blue Note/Applause, 1971. Very Good+
LP...$7.99
Early Blue Note work from the legendary Bobbi Humphrey – a session cut before she hooked up with producer Larry Mizell, but one that's still got a righteously soulful vibe! The arrangements here are by Wade Marcus, but he still has the great idea of giving Bobbi a bit more expanded sound in ... LP, Vinyl record album