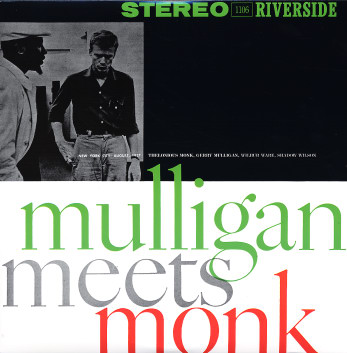 An unlikely pair, but a great one here – and the record's one of those few magical moments where bringing together unusual partners actually works! Mulligan's cool hardly seems a match for Monk's angular modernism, but together the players seem to strike a middle ground that resonates with the strength of both – a sound that cuts a bit more edge on Gerry's normally smooth baritone, and which still lets Monk's keys flow into wonderful twists and turns. Rhythm is by the great bassist Wilbur Ware and drummer Shadow Wilson – and titles include the Monk classics "Straight No Chaser", "Rhythm A Ning", "Round Midnight", and "I Mean You" – plus a version of Mulligan's "Decidedly".  © 1996-2021, Dusty Groove, Inc.
(Out of print.)

Full House (20 bit remaster)
Riverside, 1962. Used
CD...$7.99
With grooves this great, the house must have been full – and the album's a gem of an early live date by Wes Montgomery, recorded in Berkeley with a quartet that includes Johnny Griffin on tenor, Wynton Kelly on piano, Paul Chambers on bass, and Jimmy Cobb on drums! The tunes have a nicely ... CD