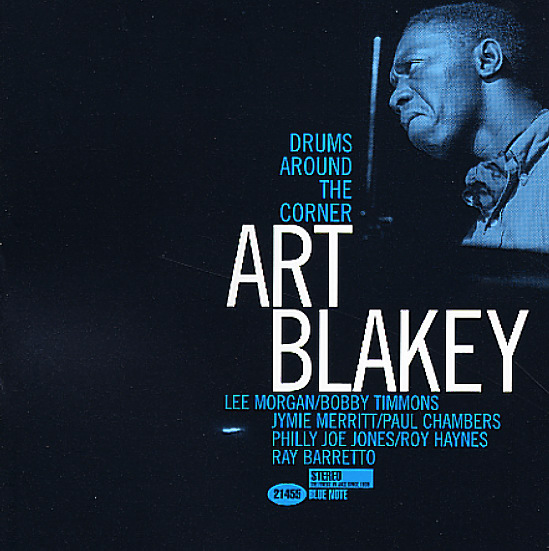 Pounding! This is the long-awaited re-release of a lost session that Blakey recorded in 1958, with a triple-drum rhythm group that included himself, Philly Joe Jones, and Roy Haynes – plus some additional conga work by Ray Barretto. Unlike other Blakey "drum orgy" sessions, though, this one's got a much straighter jazz feel – with plenty of solo space for trumpeter Lee Morgan and pianist Bobby Timmons. The drums work together in fantastic interplay – with Haynes' lyricism, Blakey's crackle, and Jones' raw power all providing perfect complement to each other while Morgan solos freely out front as the only horn (a role that he rarely ever got to take!) The set also includes 2 amazing other tracks that feature only bass and drum (not drum n bass!) interplay between Blakey and the late Paul Chambers – making for a total of 8 incredible tracks in all, with titles that include "Lee's Tune", "Blakey's Blues", "Lover", and "Drums In the Rain". Great stuff, and with notes by Kenny Washington, too!  © 1996-2022, Dusty Groove, Inc.
(1999 Connoisseur pressing.)

Holiday For Skins Vol 2 (Japanese paper sleeve edition)
Blue Note (Japan), 1958. Used
CD...$28.99
The rarest of all of Art Blakey's percussion group projects – and quite possibly the best, too! The session features Blakey at the head of a strong mix of jazz and percussion players – with Art Taylor and Philly Joe Jones on the regular drum kit, Donald Byrd on trumpet and Ray Bryant ... CD

In This Korner (with bonus track)
Concord, 1978. Used
CD...$6.99 9.99
Art Blakey at the Keystone Korner – really rattling the rafters with a great lineup that includes Bobby Watson on alto sax, David Schnitter on tenor, and Valery Ponomarev on trumpet! Although the Shorter/Morgan lineup is always hailed as one of Blakey's best, we're also pretty partial to ... CD

Live At The Monterey Jazz Festival 1972
Monterey Jazz Festival/Concord, 1972. Used
CD...$8.99
A rare live date from Art Blakey – recorded right around the same time as his Giants Of Jazz concert album for Atlantic in 1972! Like that set, this one features Blakey working with a group of bigger stars than his usual Jazz Messengers – a compelling assemblage of players that ... CD

Big Beat
Blue Note, 1960. Used
CD...$9.99
One of the greatest Art Blakey Blue Note sessions of all time – and perhaps one of the greatest to realize the genius of the Jazz Messengers lineup that included Lee Morgan on trumpet, Wayne Shorter on tenor, and Bobby Timmons on piano! The trio of young talents are at the height of their ... CD

S Make It
Limelight/Verve, 1964. Used
CD...$11.99
A lost classic from Art Blakey – quite different from some of his Blue Note work! The album's a very swinging mid 60s session, noteworthy for the presence of John Gilmore, recording here in one of his few appearances away from Sun Ra. Gilmore wails on tenor, and he sounds great next to Lee ... CD

Free For All
Blue Note, 1964. Used
CD...$9.99
Hardly a free for all at all – as the album's a masterpiece of focus and direction, and a classic set from the sextet lineup of the Jazz Messengers! The album's a real feather in the mid-60s cap of Art Blakey –and features an expanded sound from the quintet era of his group – ... CD