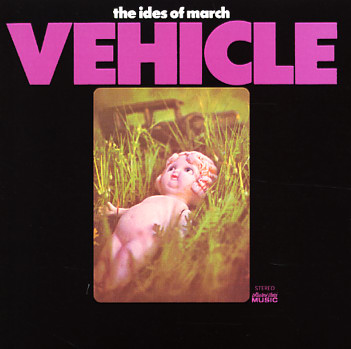 These guys will forever be known for the jazzy grooving title hit – "Vehicle", a brassy driving number that seems as if it's always being used in some sort of car commercial (which must net these guys a lot of royalties!) – but which is usually mistaken by others for being the work of Blood Sweat & Tears! Like BST, Ides Of March have a really driving sound here – pushing forward with heavy drums, sharp bits of brass, and a great early jazz rock sound that's way better than most work by the competition in years to come! Tracks include "Vehicle", "Wooden Ships", "Home", "Bald Medusa", "One Woman Man", and "Symphony For Eleanor".  © 1996-2021, Dusty Groove, Inc.
(Green label pressing. Cover has a cut corner with a minor bend.)