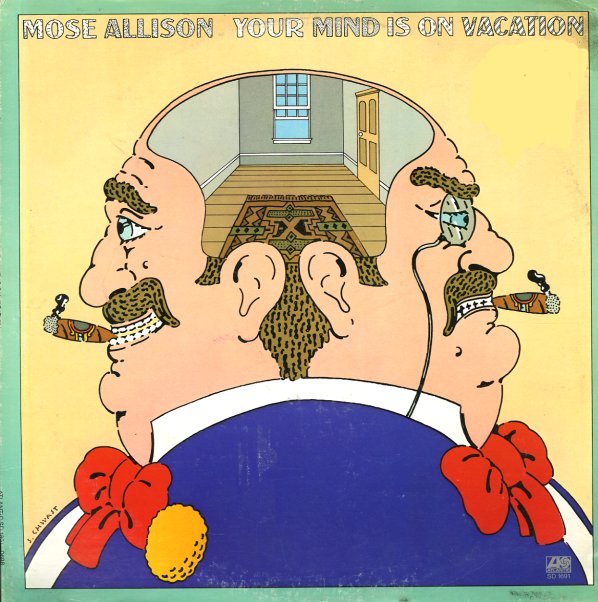 Your Mind Is On Vacation

Ol' Mose manages to keep his cool, even in the 70s – laying down some great small combo work with Joe Farrell and Al Cohn each playing a bit of tenor! That Allison vocal approach is right on the money – and titles include "Your Molecular Structure", "If You Only Knew", "What Do You Do After You Ruin Your Life", "I Feel So Good", "Fires Of Spring", and "No Matter".  © 1996-2021, Dusty Groove, Inc.
(Sealed 70s pressing!)

Creek Bank (Young Man Mose/Creek Bank)
Prestige, Early 60s. Very Good+ 2LP Gatefold
LP...$9.99
Like many other 70s reissues in the Prestige/Milestone/fantasy family, this set compiles 2 early albums by Mose. Unlike a lot of his later material, this set's mostly instrumental, though he does get in some vocals on about a third of the tracks. The album features some great work by Allison's ... LP, Vinyl record album

Songs Of New York
Atlantic, Early 60s. Near Mint-
LP...$4.99
One of Mel's best non-Bethlehem albums, and a record that's as much a loving tribute to New York as any you'll ever buy! Kind of funny, too, because in Mel's California Suite, there's all this stuff about how lousy New York is – but by the time of this early 60s recording, Mel's clearly ... LP, Vinyl record album

Great American Songbook – Recorded Live At Donte's
Atlantic, 1971. Very Good+ 2LP Gatefold
LP...$8.99
The title sounds a bit ambitious, but the album's actually a great intimate date from Carmen McRae – a beautifully-recorded small combo performance – caught live at Donte's in LA, with a sound that hearkens back to some of Carmen's best work of the 50s! The format is spare and simple ... LP, Vinyl record album

For Once In My Life
Atlantic, 1967. Very Good+
LP...$9.99
Carmen McRae gets some very groovy backing here from British maestro Johnny Keating – who helps her find a whole new sound through his wonderful arrangements on the set! The overall sound is relatively mellow, but still pretty great – all adult, and filled with unusual instrumental ... LP, Vinyl record album

Sunday In New York & Other Songs About New York
Atlantic, 1963. Very Good+
LP...$14.99
One of our favorite-ever albums from Mel Torme – a set that sparkles with the same smooth swing as his best late 50s dates for Bethlehem records! Like those sets, this one features Torme's voice really taking off over some tight jazzy charts – arranged by Johnny Williams, Shorty Rogers ... LP, Vinyl record album

Live At The Maisonette
Atlantic, 1975. Near Mint-
LP...$5.99
Great live work from a near-lost stretch of Mel Torme – a time when he wasn't recording as much as a few years before, but still has a hell of a lot of power in performance! Backings are tight and jazzy – served up by the Al Porcino, with the same punchy approach that Marty Paich gave ... LP, Vinyl record album

In Person (aka Carmen McRae Live At Sugar Hill – San Francisco)
Mainstream, 1962. Very Good+
LP...$5.99
Mainstream repackaging of a wonderful set by Carmen McCrae – captured at San Francisco's Sugar Hill in 1962 – backed by a tight trio! Carmen is in sweet form here, very loose and and wise, and the group knows just how to fill out the sound. She scats loosely on the opening "Sunday ... LP, Vinyl record album