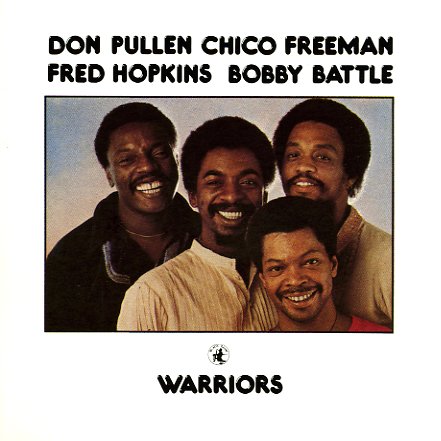 Bold sounds from this hip quartet of American players – working here on an early session for the Black Saint label, in a recording that's got a really great sense of focus! The album's dominated by the two-part track "Warriors Dance" – a number that builds beautifully on rhythms from the bass of Fred Hopkins and drums of Bobby Battle, punctuated by sharper piano from Don Pullman and wild tenor sounds from Chico Freeman – soulfully crafted, but also with some of the playful aspects you'd find in 70s work from the AACM. The tune shifts its shape a lot over the course of its 30-plus minutes – and the album's completed by the wonderful "Land Of The Pharoahs" – a leaping number with a great spiritual avant energy!  © 1996-2021, Dusty Groove, Inc.
(Original pressing – in great shape!)

Earth Passage Density
Black Saint (Italy), 1981. Near Mint-
LP...$39.99
One of the excellent non-Art Ensemble sessions cut by the team of Joseph Jarman and Don Moye – work that draws on their experience in the groundbreaking Chicago group, but also takes them into rich new territory on their own! The group's a quartet – with trombone and flute by Craig ... LP, Vinyl record album