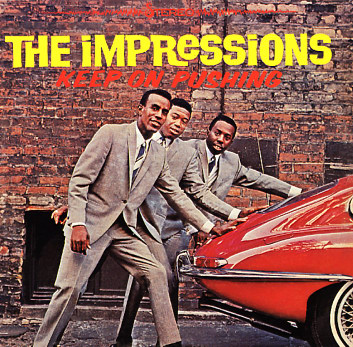 There's no need for The Impressions to push from behind – because with a record like this, they're very firmly in the driver's seat! The album's a treasure through and through – one of the greatest documents of 60s soul from the Chicago scene – filled with sublime original compositions by a young Curtis Mayfield, set to great arrangements from the legendary Johnny Pate! The sound here is immaculate – a groove that's slightly stepping, gently lilting – just enough to get things moving, but with plenty of care not to smother the fragile harmonies of the group. And as on other of the best ABC albums by The Impressions, there's not a hint of filler here – just one great track after another, with titles that include "Amen", "I Made A Mistake", "Don't Let It Hide", "Keep On Pushing", "Somebody Help Me", "Long Long Winter", and "I've Been Trying".  © 1996-2022, Dusty Groove, Inc.
(Original mono black label pressing with Bell Sound stamp. NOTE – Vinyl is in Fair condition. Cover has split seams held with grey tape.)

Time Is Running Out
ABC, 1976. Very Good
LP...$8.99
Despite the name, and a concept that makes it seem like the record might be some throwaway disco set – the album's actually a good one, very much in the mode of the best uptempo soul on ABC at the time, but done without a vocalist. The album's arranged and conducted by McKinley Jackson, who ... LP, Vinyl record album

Reaching For The World
ABC, 1976. Sealed
LP...$7.99
A really great post-Philly International album from Harold Melvin & The Blue Notes – the group's first after the departure of Teddy Pendergrass, and a set that shows them hardly missing a beat! The group are still recording at Sigma Sound, with Melvin at the production helm – and ... LP, Vinyl record album