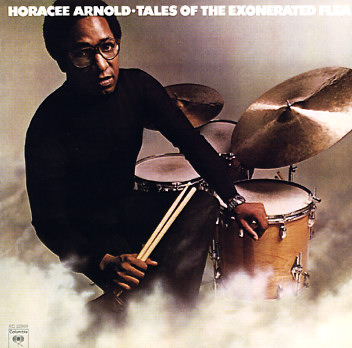 Tales Of the Exonerated Flea

A lost fusion classic from the early 70s – one of the only records cut under the leadership of drummer Horacee Arnold, but a heck of a great little set with a soaringly righteous sound! The style here is plenty full-on, but a bit less rock-leaning than some of the other Columbia fusion of the period – thanks to a spacious vision on Arnold's part, and the inclusion of a fair bit of sounds from world music. Players on the set include Art Webb on flute, Sonny Fortune on soprano sax, John Abercrombie on guitar, David Friedman on vibes and marimba, Dom Um Romao on percussion, and Jan Hammer on moog and electric piano – and although there's a fair bit of guitar in the mix, the other acoustic elements are kept nice and high too – for a blend that's almost like some of the best Brazilian fusion from later years, touched by a slightly funkier sound! Tracks really stretch out nicely, allowing for plenty of solo space as they roll on, in a way that's almost a cross between Strata East and some of the more familiar mainstream fusion modes of the time. Very hip stuff, with titles that include "Benzele Windows", "Tales Of The Exonerated Flea", "Euroaquilo Silence", "Puppet Of The Seasons", "Sing Night Jar", and "Delicate Evasions".  © 1996-2022, Dusty Groove, Inc.