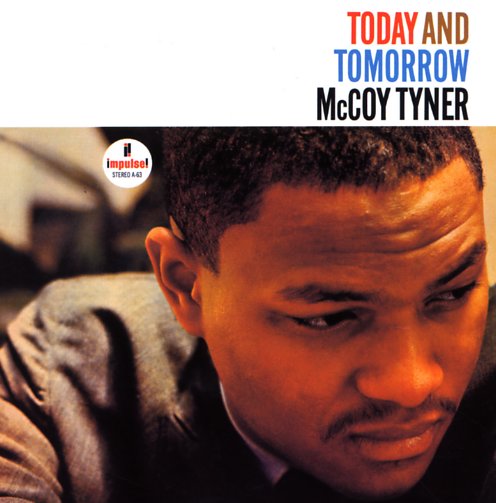 A great album from McCoy Tyner – a set that's steeped in the modal soulfulness of his years with John Coltrane, but also handled in a way that really has him breaking away from the pack a bit! Half the album's played with a trio that features Jimmy Garrison on bass – but the strongest cuts feature a sextet with John Gilmore on tenor (making a rare non-Sun Ra appearance), Frank Strozier on alto, Thad Jones on trumpet, Butch Warren on bass, and Elvin Jones on drums – all working beautifully together in an early example of the soulful group groove that Tyner would hit even more strongly in the post-Coltrane years. Titles include "T 'N A Blues", "Three Flowers", "Contemporary Focus", and "Night In Tunisia".  © 1996-2021, Dusty Groove, Inc.
(Digipack has some edgewear.)

Blue Bossa
Groove Merchant/LRC, 1991. Used
CD...$5.99
A budget package, but a great little record – a lively session from pianist McCoy Tyner, and one that's served up with a good deal of Latin influence in the rhythms! The sound here is easily on a par with any of Tyner's albums for bigger labels – especially Fantasy in the 70s – ... CD

13th House
Milestone/OJC, 1980. Used
CD...$6.99
A really majestic set of tracks from McCoy Tyner – recorded at the end of the 70s, but easily one of his best records of that fruitful decade! The group's a large ensemble – and the feel is in that perfect searching spiritual soul jazz mode that Tyner focused on as the 70s wore on ... CD

Land Of Giants
Telarc, 2003. Used
CD...$8.99
In a quartet with Bobby Hutcherson on vibes, Charnett Moffett on bass, and Eric Harland on drums. CD