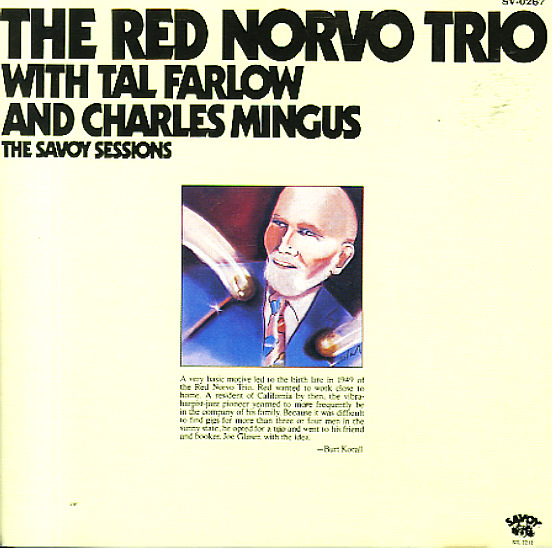 Norvo may have cut some sleepy recordings in his day, but his early sides are usually all pretty great – especially this material, recorded with Tal Farlow on guitar and Charles Mingus on bass! The drum-less combination of vibes, guitar, and bass makes for an almost-exotic approach – one that rings out with some new moods and tones on tracks that are old standards – in a manner that really helps us understand why folks from the old days think Norvo's so great! Titles include "Night & Day", "Godchild", "September Song", "Have You Met Miss Jones", "Swedish Pastry", "Time & Tide", "Little White Lies", and "Prelude To A Kiss".  © 1996-2022, Dusty Groove, Inc.
(Out of print.)

Floater Syndrome
Savoy, 1963. Used
CD...$29.99
Rare early work from pianist Paul Bley – some of his most compelling material from the time! The group features Steve Swallow on bass and Pete LaRoca on drums – and the CD features two records' worth of material – the famous Footloose session, and a whole other album! CD

Charlie Parker Story
Savoy, 1945/Early 60s. Used
CD...$5.99
Well, it's not the whole Charlie Parker Story – but the album does feature some great material from a very famous session, recorded on 11/26/1945, originally issued on 78s, along with extra tracks, compiled here in one of Savoy's posthumous Bird LPs from the early 60s. The group includes ... CD

Genius Of Charlie Parker
Savoy, Late 40s. Used
CD...$3.99
This record collects some unreleased takes as well as original masters of some of his better known recordings. Included on this collection are "Bird Gets The Worm", "Bluebird", "Klaunstance", "Barbados", "Merry Go Round", "Chasing The ... CD