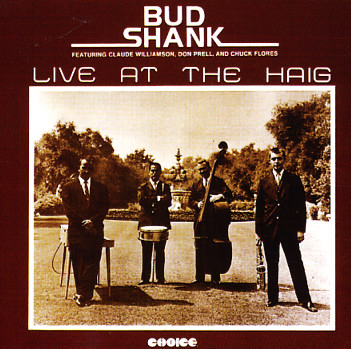 Live At The Haig

Vintage live work from Bud Shank – material recorded right around the same time as his classic quartet albums on Pacific Jazz, but with a more freewheeling sort of sound! The group here are all familiar from the studio albums – Claude Williamson on piano, Don Prell on bass, and Chuck Flores on drums – but the overall style here is more focused on Shank's solos, which stretch out in a more unfettered way than we might have expected – really getting a nice edge on the numbers with alto sax! Titles include a great exotic take on "Out Of This World", done with really great flute – plus "Lover Man", "Ambassador Blues", "I Heard You Cried Last Night", and "How About You".  © 1996-2022, Dusty Groove, Inc.
(80s UK Concept pressing. Cover has light wear and bent corners.)

Brasamba! (80s pressing)
Pacific Jazz/Liberty, 1962. Near Mint-
LP...$7.99
One of the greatest albums of Brazilian jazz that Bud Shank ever recorded – done with a style that's a lot more like some of the best bossa albums from Rio at the time! Bud's recorded in other bossa settings before – but there's something about this record that really gets the whole ... LP, Vinyl record album

Barefoot Adventure
Pacific Jazz, 1961. Near Mint-
LP...$29.99
Amazing! Although this album's a soundtrack to some goofy California surfer film, it's actually a killer batch of off-kilter jazz tracks composed by Bud Shank, and with a sound that's unlike anything we've ever heard from him! The frontline of the session is Shank, Bob Cooper, and Carmell Jones ... LP, Vinyl record album