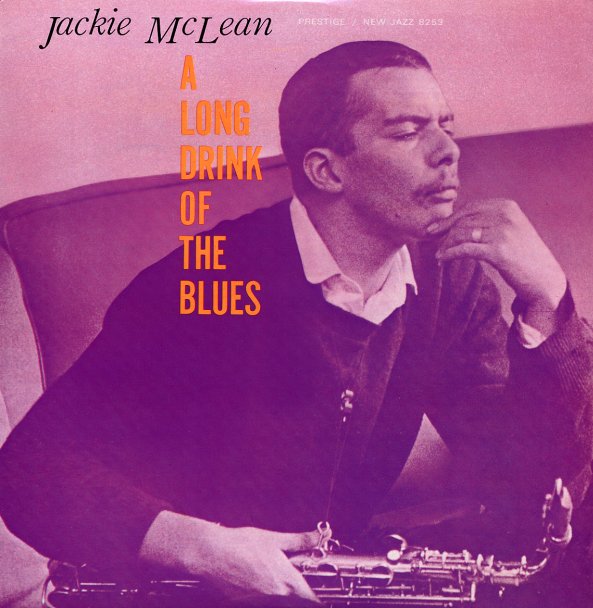 Long Drink Of The Blues

Long-blowing late 50s work from Jackie McLean – one of his standout sets as a leader from the pre-Blue Note years! The album features McLean in two different settings – really opening up on side one with a sextet that includes Curtis Fuller on trombone, Webster Young on trumpet, Gil Coggins on piano, Paul Chambers on bass, and Louis Hayes on drums – in two long takes of "A Long Drink Of The Blues", which features Jackie on both alto and tenor! Side two is a bit tighter, with Jackie heading up a quartet that includes Mal Waldron on piano, Art Phipps on bass, and Art Taylor on drums – on tunes that include "I Cover The Waterfront", "These Foolish Things", and "Embraceable You".  © 1996-2022, Dusty Groove, Inc.
(Out of print.)

Destination Out (RVG remaster edition)
Blue Note, 1963. Used
CD...$13.99
A modernist classic from 60s Blue Note! The album's one of Jackie McLean's greatest from the time – and one of his seminal "new thing" sessions cut with young modernists Grachan Moncur III on trombone and Bobby Hutcherson on vibes – both young players who were really finding ... CD

Hat Trick – Jackie McLean Meets Junko Onishi
Blue Note, 1996. Used
CD...$9.99
No tricks, no gimmicks – just a set that's deeply respectful of all the sharp edges of Jackie McLean's years of work on alto sax, but which also has him nicely returning to the mainstream spotlight as well! By that, we don't mean that there's anything soft or commercial about the record ... CD

Nature Boy
Blue Note, 1999. Used
CD...$7.99
A very nice recent album by Jackie, featuring a stripped-down lineup that includes Cedar Walton on piano and Billy Higgins on drums, joining Jackie in a haunting set of mellow ballads. After years of playing, Jackie's tone is impeccable, and it's great to hear him work through a set of standards ... CD