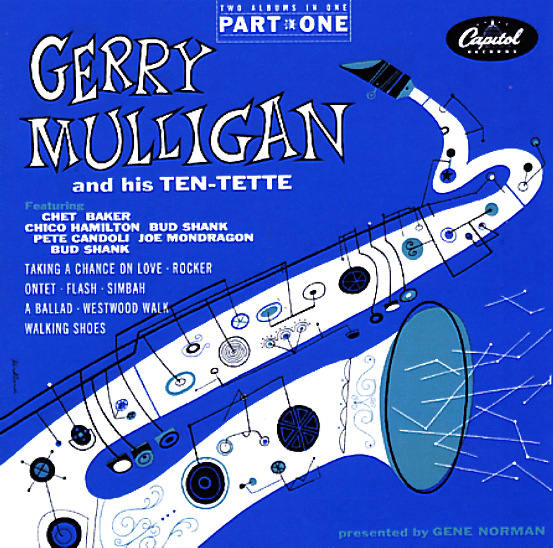 A great double-length CD that features 2 key west coast jazz sessions from Capitol Records! First up is Shorty Rogers' Modern Sounds – seminal west coast work from the start of the 50s! The group here is Rogers at his hippest – before a bigger rise to 50s fame, and right at the start of a great run as a leader and arranger on his own. The Giants combo here features Art Pepper on alto, Jimmy Giuffre on tenor, John Graas on French horn, and Hampton Hawes on piano – all playing with a style that's tight, yet still has plenty of swing, and a lot more room for individual group voices than other later arrangers who tried to cop Shorty's style! All tracks are extremely playful, but without sounding gimmicky – and tunes include "Four Mothers", "Didi", "Sam & The Lady", "Over The Rainbow", "Apropos" and "Popo". Next is Gerry Mulligan & His Ten-Tette – an early cooker from Mulligan, who's working with a real birth of the cool-styled group that includes Chet Baker and Pete Candoli on trumpets, Bud Shank on alto, John Graas on French horn, Bob Enevoldsen on trombone, and Chico Hamilton on drums – a really wonderful group that has a swing that's might lighter than you might guess from its size! The set is nicely arranged throughout – an early example of Gerry's powers in this respect – with plenty of thought in each tune, yet never so much so that the proceedings get too academic. Titles include "Rocker", "Walking Shoes", "Simbah", "Ontet", "Westwood Walk", "A Ballad", "Taking A Chance On Love", and "Flash".  © 1996-2022, Dusty Groove, Inc.
(Out of print.)