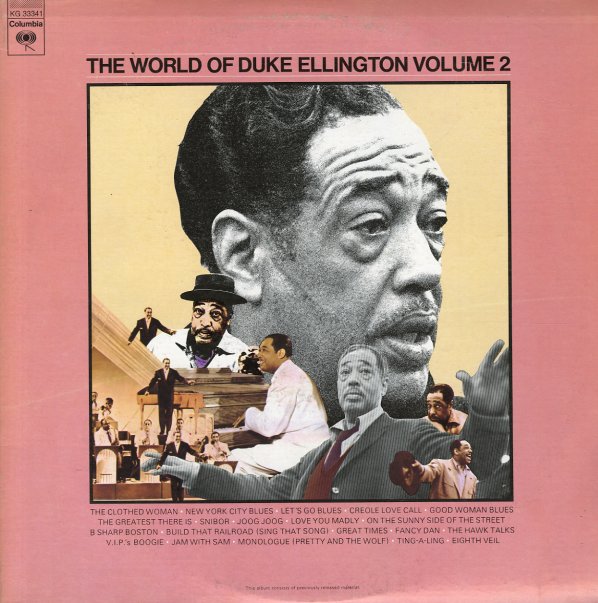 Duke Ellington At Fargo 1940 – Vol 2
Jazz Heritage, 1940. Near Mint-
LP...$7.99
A great documentation of this rare live set from 1940 – one of the best slices of Ellington from the time! With Johnny Hodges on alto sax, Duke Ellington on piano, Harry Carney on baritone sax & clarinet, Jimmy Blanton on bass, Otto Hardwick on alto sax & clarinet, Barney Bigard on ... LP, Vinyl record album

All American In Jazz
Columbia, 1962. Near Mint-
LP...$4.99 14.99
A lesser-known Ellington set from the 60s – tracks from the lesser-remembered musical, with alto from Johnny Hodges, trumpet from Ray Nance, and tenor from Paul Gonsalves! Titles include "Our Children", "Nightlife", "I've Just Seen Her", "Back To ... LP, Vinyl record album

Newport 1958
Columbia, 1958. Very Good+
LP...$24.99
Duke Ellington at Newport and in the studio – in a set of tracks recorded both live and away from the concert – but with a really unified feel overall! Duke's group here is in fine fine form – with key late 50s players who include Johnny Hodges on alto, Paul Gonsalves on tenor, ... LP, Vinyl record album

Drum Is A Woman
Columbia, 1956. Very Good+
LP...$14.99 19.99
A hokey cover and title, but a hip little record from Duke Ellington – kind of a story of percussion and jazz, all wrapped together with some great vocals and narration! The format is kind of far-reaching, but never too stuffy – and in a way, the album offers a great opportunity to ... LP, Vinyl record album

Ellington Indigos
Columbia, 1957. Very Good
LP...$11.99 16.99
One of Duke Ellington's best albums of the 50s – a well-conceived session of dark moody tracks that revisits a few old favorites, hits a few standards, and offers a new gem that's right up there with the classics! The "indigos" title is taken very seriously here – as the ... LP, Vinyl record album