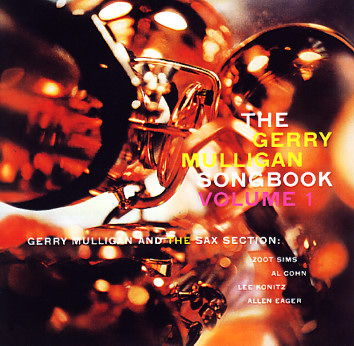 Gerry Mulligan Meets The Sax Giants Vol 1
Verve (UK), Mid 50s-Early 60s. Near Mint-
LP...$9.99
Classic Mulligan recordings with Stan Getz, Ben Webster, Paul Desmond, and Johnny Hodges – with titles that include "Blues In Time", "A Ballad", "Bunny", "Tell Me When", "Who's Got Rhythm", "Shady Side", "Too Close For ... LP, Vinyl record album

Profile (Trip)
Mercury, 1955. Near Mint-
LP...$7.99
A pretty obscure session by Gerry – recorded in 1955, and featuring Jon Eardly on trumpet, Zoot Sims on tenor, and Bob Brookmeyer on trombone. Gerry actually plays a bit of piano, in addition to his usual baritone – and the set bubbles with a lightly swinging, slightly modern feel that' ... LP, Vinyl record album

Jeru
Columbia, 1962. Near Mint-
LP...$14.99
A pretty great little album – and very different than Gerry Mulligan's regular sides from the time! The session was originally produced as part of the sessions for the short-lived Jazztime label in the early 60s – and was produced by Dave Bailey with a soulful undercurrent that's quite ... LP, Vinyl record album

What Is There To Say?
Columbia, 1959. Very Good+
LP...$9.99
A beautiful pairing of the baritone of Gerry Mulligan and the trumpet of Art Farmer – brought together wonderfully in this piano-less session that has both players effortlessly carving lines in the open space of the studio. Rhythm is by the team of Bill Crow on bass and Dave Bailey on drums ... LP, Vinyl record album

Lighthouse '68 (Applause)
Pacific Jazz, 1968. Very Good+
LP...$7.99
One of their many fantastic live sets from The Lighthouse – just about all of which are excellent. This one's one of their best, and features a few beautiful longer tracks that have a spiritual soulful vibe that you don't always get from the group. These tracks include "Native ... LP, Vinyl record album

Soul Hits
Pacific Jazz, Mid 60s. Very Good+
LP...$16.99
A really hard-hitting groover from the great 60s trio of Les McCann – a set that adds in some extra guitar from Joe Pass, who definitely sounds his most soulful on the set! Joe grooves perfectly with Les' piano – and has almost a Kenny Burrell-like depth in tone throughout – one ... LP, Vinyl record album