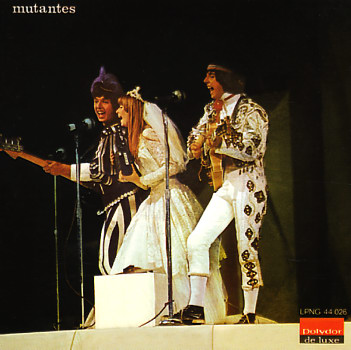 The second set of madness from the legendary Os Mutantes – and like the first, an album done in close collaboration with arranger/producer Rogerio Duprat, whose talents add a new level of genius to the record! The album's got a compelling mix of styles that strikes out on the very first tune – a playful pastiche that's partly postmodern, partly psychedelic, and still tremendously powerful decades later – even if you can't understand most of the lyrics! Styles are just about impossible to pin down, but that's what makes the record so unique and essential – and if you ever needed one album to convince you of the mindblowing energy taking place during the Tropicalia years, this one may well be it! A few tracks are written by Tom Ze, and titles include "Dom Quixote", "Dia 36", "Magica", "Rita Lee", "Algo Mais", "Qualquer Bobagem", and "Fuga No II".  © 1996-2022, Dusty Groove, Inc.
(Out of print, Brazilian pressing.)

Domingo
Polydor (Brazil), 1967. Used
CD...$9.99
Beautiful early duets from Caetano Veloso and Gal Costa – much more of a bossa-styled album than any of the late 60s Tropicalia albums from the pair! The set's got a really wonderful sort of feel – bossa at some level, but also with some of the gentle darkness that Caetano and Gal ... CD