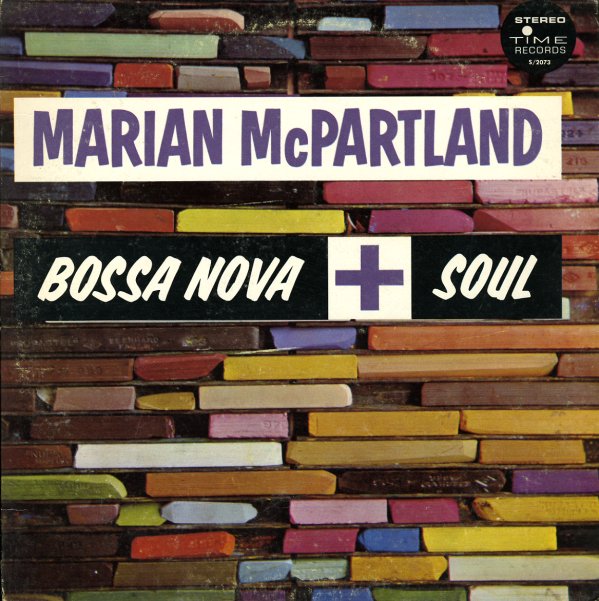 One of the most unique albums ever cut by pianist Marian McPartland – and definitely a set that offers up the bossa and soul promised in the title! Marian's playing electric and acoustic, over some very groovy rhythms from the trio of Ben Tucker on bass, Dave Bailey on drums, and Ralph Dorsey on congas – a group who give Marian a groove that's much more like the sort you'd find on a 60s record by Vince Guaraldi than any of her other work! The electric piano is great – not a Fender Rhodes, but most likely a Wurlitzer – which creates unusual tones that again really changes the McPartland sound – and the rhythms throughout create a wicked vibe, and loads of wonderful modal numbers. Titles include "Stranger In A Dream", "Coming Home Baby", "Green Dolphin Street", "Baby You Should Know It", "Love For Sale", "Tell Me", and "Sweet And Lovely".  © 1996-2022, Dusty Groove, Inc.
(Stereo pressing with deep groove. Cover has light wear and aging, center splits in the spine and bottom seam and light tearing along the bottom paste-on.)

Song For My Father
Blue Note, 1963. Very Good+
LP...$199.99 (CD...$6.99, CD...$7.99)
An incredible record – the kind of album that only Blue Note could put out, and an instant classic that will sound wonderful forever! The album's truly one of the great ones – one of those Blue Notes that still makes you stop and pause when you hear it, even though you've heard it a ... LP, Vinyl record album

Buddy Childers Quartet
Liberty, 1956. Very Good+
LP...$28.99
Trumpeter Buddy Childers leads a quartet that includes other LA jazz players like Arnold Ross on piano and Harry Babasin on bass. The set's fairly straight forward, and Buddy's got a style that's very polished and sparkling, but which lays back in a nice easy groove on a number of the tracks. ... LP, Vinyl record album

Night Beat
RCA, 1957. Very Good+
LP...$24.99
One of Tito Puente's best sides for RCA – a really jazzy effort that was cut with a top-shelf list of players! The groove's a bit different than some of Tito's other work – but in a good way, and one that has him stretching past straight Latin to mix in a heavy dose of jazz – ... LP, Vinyl record album