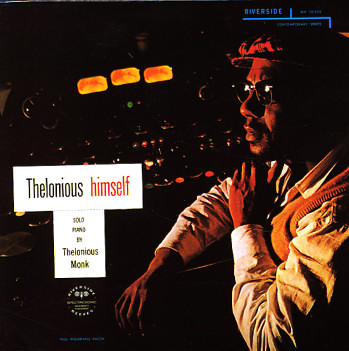 Also available
Thelonious Monk — Thelonious Himself (Keepnews collection – with bonus tracks) ... CD 7.99
A classic outing of solo piano by Thelonious Monk – a format that wasn't used often, but which always made for some really compelling work! Monk in this mode is often different than the bolder leader of a trio or larger group – and there's a more introspective quality to the record that we really like – a sound that's sometimes tentative, then sometimes pushing forward with strength – almost more human than on some of his other efforts of the late 50s. John Coltrane makes a surprising appearance on the last track – "Monk's Mood" – and other titles include "April In Paris", "Ghost Of A Chance", "Functional", "I'm Getting Sentimental Over You", "I Should Care", "'Round Midnight", and "All Alone".  © 1996-2022, Dusty Groove, Inc.
(CRC pressing.)