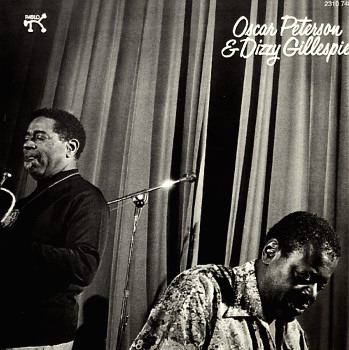 A striking little record – and the kind that both players could only have made with the new freedoms in jazz recording of the 70s! Although Peterson and Gillespie had played together before on earlier Verve albums, the setting was never like this – because the album's only a duet between trumpet and piano, with no other instrumentation at all – yet the sound is amazing swinging! Peterson works almost as a one man rhythm section here – bouncing the tunes with plenty of hard inflections on his left hand – and setting up a swing that Dizzy blows over with warmly muted tones. There's a quality here that's personal – but not in that "oh look at us, we're such big stars" sort of way – and titles include "Mozambique", "Caravan", "Dizzy Atmosphere", "Blues For Bird", and "Con Alma" – always a treat to hear in a setting like this!  © 1996-2022, Dusty Groove, Inc.
(Please note: rear artwork looks fine from the outside but has some glue and wear under the inner tray, a bit of clear tape, small cutout hole, and is missing one spine – out of print and priced accordingly.)