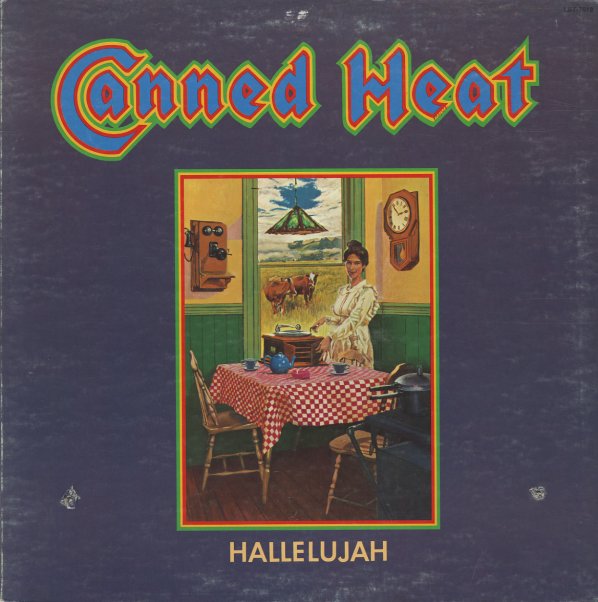 A late 60s classic from Canned Heat – a record that captures the group during that moment when their unique blend of styles was really on fire! There's a grittier, almost noisier vibe going on here at times – fuzz turned up a bit more than before, and maybe a bit more attitude – as if the group were getting spurred on by some of the societal changes at the end of the 60s, and shaken out of any reveries of the past! The set's filled with very heady tunes – titles that include "I'm Her Man", "Sic Em Pigs", "Do Not Enter", "Big Fat", "Huautla", "Get Off My Back", and "Down In The Gutter But Free".  © 1996-2022, Dusty Groove, Inc.
(Black label stereo pressing. Cover has a cut corner, ring and edge wear, discoloration from age, and some sticker spots.)

Boogie With Canned Heat (Japanese pressing)
Liberty (Japan), 1968. Very Good+
LP...$43.99
The record that really broke Canned Heat out of the pack – still plenty bluesy, but with the trippier touches you might guess from the cover's psychedelic image – a perfect summation of that unique placement the group had on the late 60s Cali scene! The record's the one that gave the ... LP, Vinyl record album

Future Blues
Liberty, 1970. Very Good+ Gatefold
LP...$24.99
A record with a space age cover, but a set that's every bit as raw and rootsy as all of the previous Liberty Records releases by Canned Heat! The group have really upped their chops here – and guitarist Harvey Mandel really sounds amazing, and is bringing in some of the funky elements that ... LP, Vinyl record album

Spaceship Earth
Liberty, 1970. Very Good+ Gatefold
LP...$16.99 (CD...$18.99)
The searing second album from Sugarloaf – a set that has Jerry Corbetta wailing even more heavily on the organ than before, and the group working with the kind of razor-sharp intensity that made them such a big act at the time! Corbetta also handles most of the lead vocals, but the group ... LP, Vinyl record album

Sugarloaf
Liberty, Late 60s. Very Good+ Gatefold
LP...$14.99
A fantastic debut from Sugarloaf – a group who managed to use the Hammond organ in ways that were just as strong as the guitar in most other groups! The approach here seems to draw a lot from all the best changes taking place in soulful jazz – as Jerry Corbetta manages his keyboards ... LP, Vinyl record album