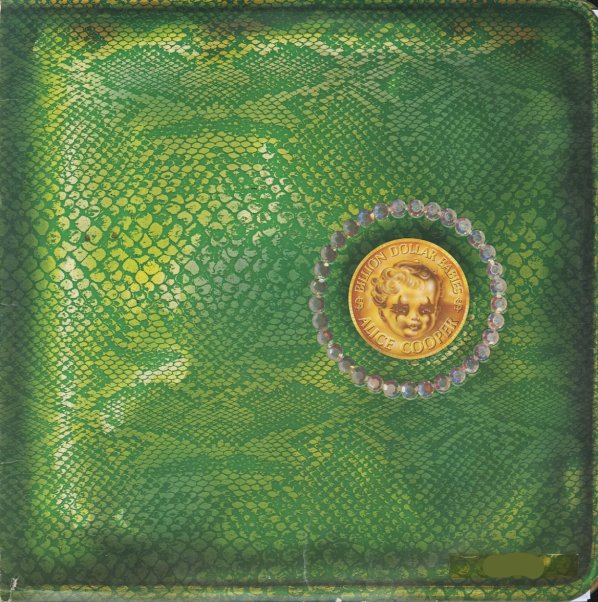 Alice Cooper at his most sinister – crossing over big, but still keeping plenty of the lean, mean edge from the early days! The package does more than enough to live up to the hype that was building around Cooper at the time – building hip up as much as a baby-chopping monster as much as a hard Detroit rocker – and the album's filled with well-focused tunes that definitely helped propel hard rock into the American mainstream! Titles include the classic "No More Mr Nice Guy" – plus "Elected", "I Love The Dead", "Hello Hurray", "Sick Things", and "Billion Dollar Babies".  © 1996-2022, Dusty Groove, Inc.
(Burbank label pressing, including the dollar insert. Die-cuts are intact. Cover has partially split spine, name in marker, light ring & surface wear.)

Welcome To My Nightmare
Atlantic, 1975. Very Good+
LP...$14.99
A record that might have been a step into cliche for Alice Cooper – but one that still stands surprisingly strong after all these many years! Sure, the Coop as spook-master is very firmly stated on the cover and title – and yes, the record does feature an appearance from Vincent Price ... LP, Vinyl record album

Skeletons In The Closet – The Best Of The Grateful Dead
Warner, Late 60s/Early 70s. Near Mint-
LP...$29.99
The long strange trip the Grateful Dead began with Warner Bros in the late 60s culminated in this concise, pretty darn solid attempt at an early Best Of, appropriately called Skeletons In The Closet! The Dead would never be best known for their studio recordings, but this really is a good reminder ... LP, Vinyl record album

Machine Head
Warner, 1972. Very Good+ Gatefold
LP...$14.99
One of the crowning classics from the early years of Deep Purple – and a set that will forever be remembered for giving the world the classic rock anthem "Smoke On The Water"! Yet the record as a whole is even better – and is filled with some long-burning, hard-wailing tracks ... LP, Vinyl record album