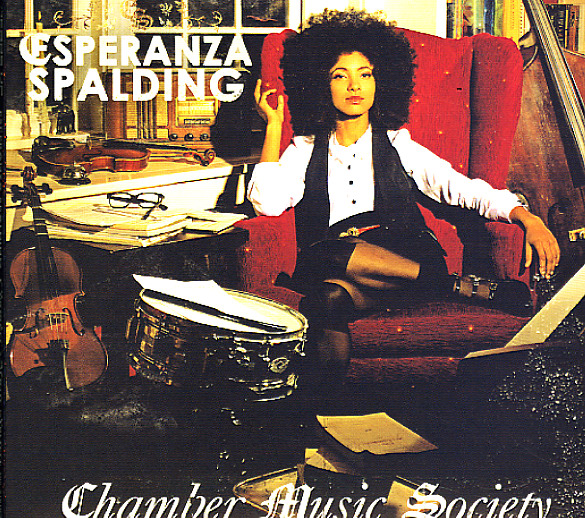 A timeless mix of heart tuggingly intimate strings and beautiful vocals by Esperanza Spalding – a set that feels deep down close to the heart, and in turns, quite soaring – all the while wonderful! The aspects we loved so dearly on Esperanza's previous albums are also done here – touching on soulful Brazilian, soul jazz and chamber pop & soul influences, lovely wordless vocals as well as sweeter singing, and beautiful performances by the players. Ms Spalding is on bass and vocals with Leo Genovese on piano, Rhodes & melodica, Terri Lyne Carrington on drums and Quintino Cinalli on percussion. The great Milton Nasciemento guests on "Apple Blossom", and other titles include "Little Fly", "Knowledge Of Good And Evil", "Really Very Small", "Chacarera", "Wild Is The Wind", "Apple Blossom" and "Short And Sweet".  © 1996-2023, Dusty Groove, Inc.

Junjo
Ayva (Spain), 2006. Used
CD...$9.99
A wonderful little record that's like few other we can think of – the debut of bassist Esperanza Spaulding, a player who also sings along wordlessly with her strings! The style is quite unique, and completely great – and Esperanza's really opened up a whole new territory here with her ... CD

Enter My Mind
Black Honey, 2003. Used
CD...$6.99
A stunning debut from singer Marlon Saunders – a fantastic male vocalist who's gonna be huge! Marlon's got a smooth and seductive vocal approach that really takes us back to mellow 70s Isley Brothers, later ballad tracks from the O'Jays, and even a bit of the best work from Marvin Gaye ... CD

Soul Providence
Dome (UK), 2005. Used
CD...$7.99
Incredible work from one of the greatest living soul singers – the best album in years from Carleen Anderson, and a record that really lives up to the promise that gripped us when we first heard her with the Young Disciples! Anderson's the daughter of James Brown diva Vicki Anderson – ... CD