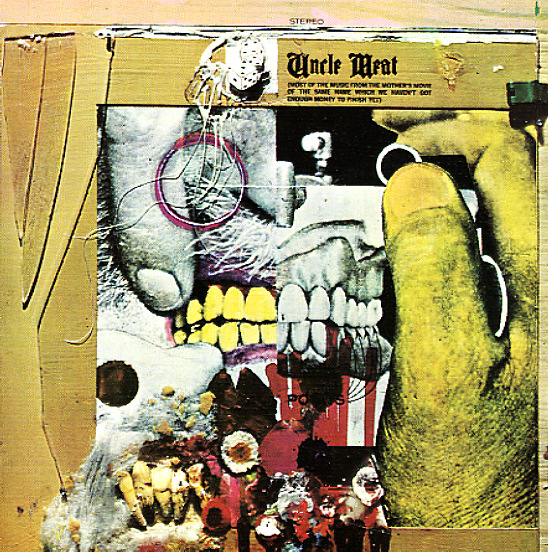 An amazing movie in sound – supposedly music (and more) that was going to be used in a film project, issued to the public while Zappa was trying to raise money for production! The album's one of the most tripped-out studio efforts to date from the group – loads of overdubbing, and wonderfully complicated instrumentation – with some especially great keyboards from Don Preston and Ian Underwood, whose keys alone almost preface the future of fusion – while, at the same time, display some key links to 20th century avant music as well! Vocals are dropped in at just the right time, but the instrumental interplay is what really makes the record special – over many short tracks that include "Mr Green Genes", "We Can Shoot You", "Dog Breath Variations", "Sleeping In A Jar", "The Legend Of The Golden Arches", "Uncle Meat", "Cruising For Burgers", and "King Kong" in many variations.  © 1996-2021, Dusty Groove, Inc.
(Blue label Bizarre pressing. Cover has ring and edge wear with splitting in the seams.)

Fleetwood Mac (1975)
Reprise, 1975. Very Good
LP...$14.99 (LP...$69.99)
The album that brought the excellent, but heretofore underappreciated duo of Lindsey Buckingham and Stevie Nicks into the band – and pretty much changed the fabric of 70s rock! Older fans of the Peter Green and Bob Welch Brit blues eras of Fleetwood Mac may have been in for a shock initially, ... LP, Vinyl record album

Fleetwood Mac (1975) (Original Master Recording)
Reprise/Mobile Fidelity, 1975. Very Good+
LP...$69.99 (LP...$14.99)
The album that brought the excellent, but heretofore underappreciated duo of Lindsey Buckingham and Stevie Nicks into the band – and pretty much changed the fabric of 70s rock! Older fans of the Peter Green and Bob Welch Brit blues eras of Fleetwood Mac may have been in for a shock initially, ... LP, Vinyl record album