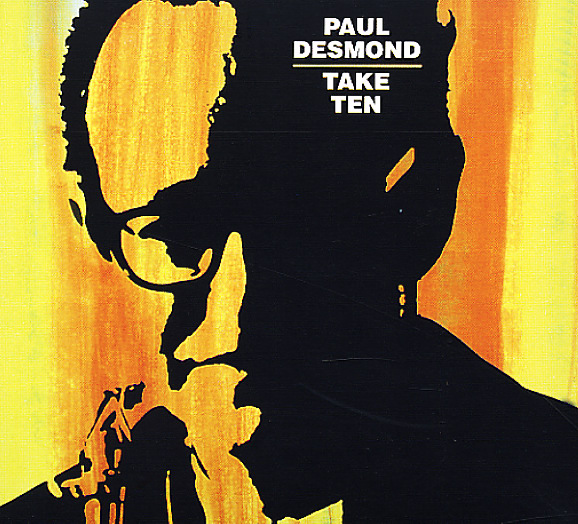 Take Ten Plus (with bonus tracks)

Also available
Paul Desmond — Take Ten (Japanese paper sleeve edition) ... CD 6.99
That's "Take Ten", not "Take Five" – a great title cut that echoes Paul Desmond's previous work with Dave Brubeck – but which then gives way quickly to some sweet bossa-styled grooves done with guitar from Jim Hall! The album's one of the strongest of the Hall/Desmond collaborations for RCA – A sublime showcase not just for Paul's impeccable alto, but also for the amazing tones and chromes that fly freely from the strings of Jim's guitar! Both players are set up with just a bit of gentle backing – light percussion from Connie Kay, and a bit of bass from Gene Cherico or Gene Wright. The whole thing's a well-conceived study in economy, as the two players craft sly and subtle lines around spare drum and bass backings – slowly hanging sound in space to weave a rich web of sound that's as compelling as it seems to be effortless! Titles include "Take Ten", "El Prince", "Embarcadero", "Samba De Orfeu", "Theme From Black Orpheus", and "Alone Together". Plus, the CD reissue features 3 bonus tracks – "Out Of Nowhere", and alternate takes of "El Prince" and "Embarcadero".  © 1996-2022, Dusty Groove, Inc.
(1999 CD pressing.)

Paul Desmond Quartet Live
Verve, 1975. Used
CD...$5.99
One of our favorite Paul Desmond records of all time – a set of understated brilliance that really lets him display his genius! Desmond at this time had been lost in some other sets that respected his talents, but didn't offer the greatest proof that he'd been growing as an artist – ... CD

Pure Desmond (with bonus tracks)
CTI, 1974. Used
CD...$5.99 (LP...$24.99)
An album of sublime understatement from alto genius Paul Desmond! Desmond was one of the few players who resisted the lure of the 70s electric CTI sound – and stuck pretty much in his usual bag of easy-going grooves, blowing alto with effortless ease, working here with a quartet that ... CD

First Place Again (Japanese pressing)
Warner (Japan), 1960. Used
CD...$11.99
The first big Paul Desmond solo album of the 60s – and a standout set that's very much in the tradition of his best work on RCA! This rare side was cut for Warner Brothers during a time when they were taking a brief dip into jazz – and it's a rarely-heard set that features Jim Hall on ... CD

Ellingtonia Moods & Blues
RCA, 1960. Used
CD...$8.99
One of the best small-group sessions recorded by Paul Gonsalves – a session with a clear Ellington orientation, as you'd expect from a lineup that includes Johnny Hodges, Jimmy Jones, Ray Nance, and Oliver Jackson. Tracks have a much more relaxed and open-ended feeling than some of Duke's ... CD