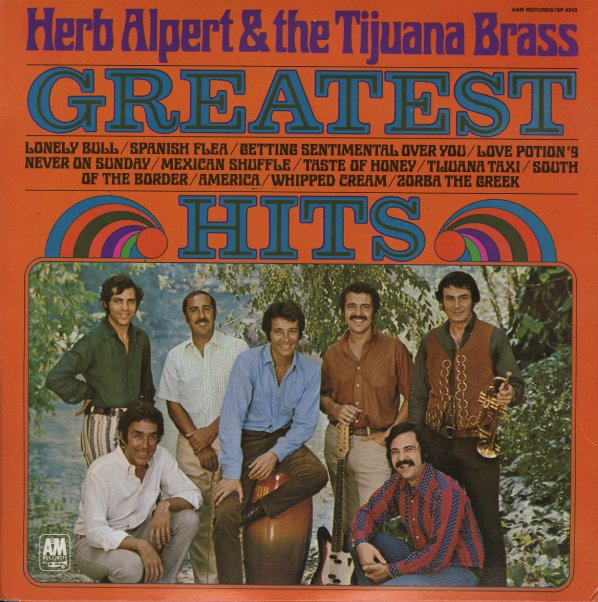 Going Places
A&M, 1965. Very Good+
LP...$4.99
Herb Alpert's definitely Going Places by the time of this set – and his trademark Tijuana Brass sound proves itself to be a great fit for just about any sort of number! The album kicks off with the wonderful "Tijuana Taxi", a sublimely jaunty tune that almost takes Herb into ... LP, Vinyl record album

Whipped Cream & Other Delights
A&M, 1965. Very Good+
LP...$11.99 (CD...$6.99)
Trumpety magic from Herb Alpert & The Tijuana Brass – a record that's known not only for its classic cover of a model dipped in whipped cream, but also for it's tremendously groovy groove! The Tijuana sound is very firmly in place by the time of this set – Mexican-inspired, but ... LP, Vinyl record album

Burt Bacharach (1971)
A&M, 1971. Very Good Gatefold
LP...$2.99
Insanely wonderful work by Bacharach – in a way that we can hardly begin to describe (but we'll certainly try!) By the time this one was recorded – 1971 – Burt's reputation as a songwriter and arranger were so firmly established that he had an incredible amount of freedom in the ... LP, Vinyl record album

Reach Out
A&M, 1967. Very Good+
LP...$7.99
Fantastic! We love Burt Bacharach in so many ways that it's easy to forget the genius of these early A&M sides – but going back to them is always a treat, and it's wonderful to hear the way that Burt lays down his own work when given the chance! You know the tracks – "House ... LP, Vinyl record album